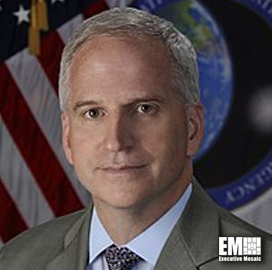 Cardillo served as the sixth director of the NGA in 2014 and led the agency through significant changes in the technology and global threat landscapes while also reinforcing NGA’s position as a vital component of the national intelligence community. 2019 Wash100 Award winner Vice Adm. Robert Sharp succeeded Cardillo as the NGA’s director in Feb. 2019.

“Robert is a respected leader and strategic partner within the intelligence community and I’ve had the distinct honor of working with him throughout his more than 30 years of public service,” said Stu Shea, CEO, president and chairman of Peraton and fellow 2019 Wash100 Award winner.

“I look forward to his counsel as Peraton continues to demonstrate the critical role technology plays in support of national security operations and mission success.”

Prior to his role as NGA director, Cardillo served as deputy director for Intelligence Integration with the Office of the Director of National Intelligence between Sept. 2010 and Aug. 2014. He also served as the senior manager for the U.S. Department of Defense for more than 27 years.

Cardillo graduated from Cornell University with a bachelor’s degree in Government, and earned a master’s degree in National Security Studies from Georgetown University.

Peraton provides innovative, reliable solutions to the nation’s most sensitive and mission-critical programs and systems. As a trusted provider of highly differentiated space, intelligence, cyber, defense, homeland security, and communications capabilities, Peraton is a critical partner to the Intelligence Community, Department of Defense, and select federal agencies and commercial entities.

Robert Cardillo, former National-Geospatial-Intelligence Agency (NGA) director and four-time Wash100 Award winner, has joined Peraton’s advisory board, Peraton announced on Wednesday. Peraton’s Advisory Board provides advice and counsel to the company on its strategic direction. Cardillo served as the sixth director of the NGA in 2014 and led the agency through significant changes in the