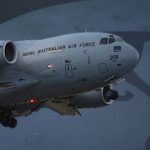 The Australian defense department said Friday it will spend approximately $1 billion to buy the C-17As as well as to modernize an aircraft maintenance facility and other infrastructure at an air force station in Queensland.

Australia’s air force currently owns six Boeing C-17s and has used the aircraft to transport military personnel and supplies during humanitarian and disaster relief operations in Australia and overseas.