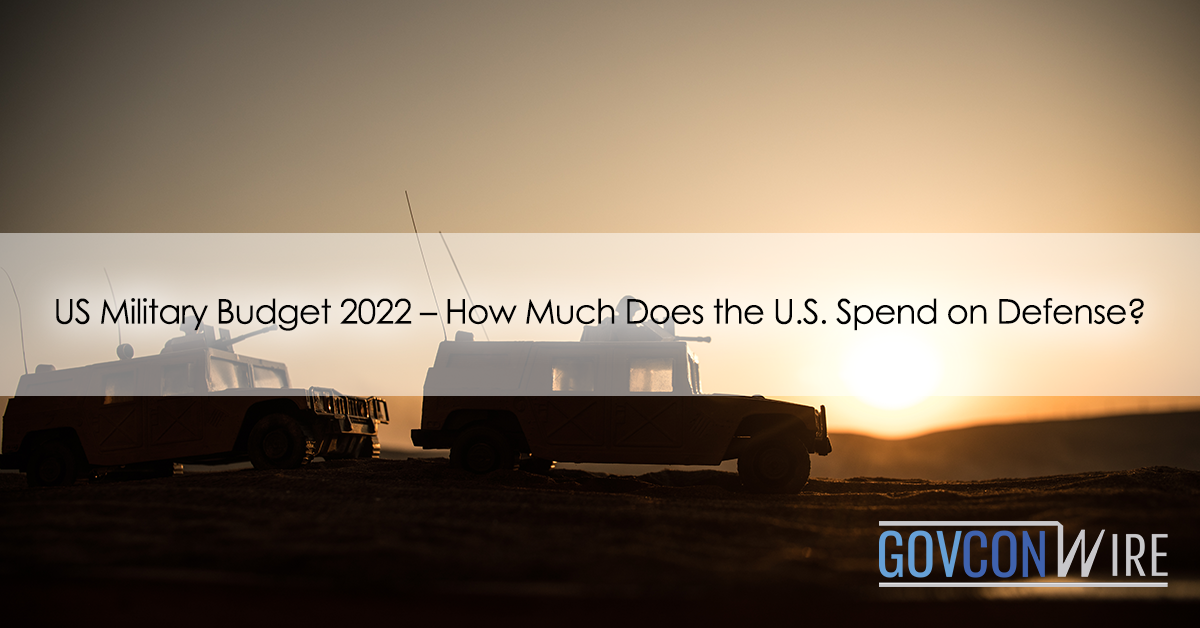 Home Articles US Military Budget 2022: How Much Does the U.S. Spend on Defense?

The United States is a country highly concerned about its military defense. Being the most powerful military globally, the U.S. government ensures its military is always ready to go.

According to ExecutiveGov, the country’s proposed spending, mainly the Department of Defense budget, reached $778 billion in 2022, which is a 14% increase in military spending compared to 2017. According to the ranks, the second country is China, which has a military budget of $229 billion.

We all know the military budget in the U.S. is at an all-time high. However, if you’re wondering just how the U.S. uses its resources for defense each year, this post has everything you need to know. Keep reading to learn more about the military budget for 2022 in detail.

How much of the US annual federal budget goes to the military?

The U.S. military spending can be broken down into multiple components. The DoD’s $715 billion base budget makes up the largest portion of the overall defense budget. Also, several other agencies are protecting the country both inside and outside the borders. These agencies include:

Breakdown of the DoD Base Budget

The National Defense Allocation Act (NDAA) accepted the DoD’s defense base budget for the current fiscal year and was signed into law in December 2021. This granted the DoD a $715 billion defense budget to fund the implementation of new programs and technologies, modernize weapons systems, improve military readiness, and research and development projects.

Mandatory spending is automatically provided by law and cannot be changed except through an act of Congress.

The future of the United States’ defense spending is expected to remain the world’s top military power. However, it might be challenged by Russia and China in the coming years.

The defense department budget takes the largest portion of the U.S. discretionary spending. The defense department allocates more than 50% to maintenance and personnel, where a defense budget increase is expected in the future because of medical costs and retirement. This would result in less funding for research and development, housing, and procurement.

Overseas contingency operations is the term used by the U.S. Department of Defense to describe the funding allocated for the War on Terrorism and other overseas military operations.

The defense department has documents indicating that it has used OCO funding for activities not related to the war in the past years. An example is when the department’s budget request for the fiscal year 2019 was estimated to be $358 billion in OCO funding from 2015 to 2019. The DoD categorizes that amount as $68 billion for activities aside from Iraq, Syria, and Afghanistan operations.

What are the components of the military?

The U.S. president is the commander in chief of the armed forces. The DoD’s mission is to provide military forces to prevent war and keep national security in place. Its headquarters is located at the Pentagon.

The army is a land-based force specializing the ground combat operations and currently has 476,000 soldiers. Its tasks are to properly organize, equip, and train forces to conduct sustained land operations. Also, it has three components with one active and two reserved components, known as the U.S. Army Reserve and the Army National Guard.

Military reserves may be called out during a national emergency or to counter a sudden threat to national security. The federal government supports them, and they must add to the active-duty force when more people are needed other than the regular personnel during times of need or war declaration.

The navy is an ocean-based force specializing in ship-to-ship combat with other countries’ navies and providing naval support for other branches during the war. A massive and modern navy includes the following:

Air force is an air-based force specializing in air warfare using fighter jets and bombers against enemy forces on land or at sea as well as providing bomb support for other branches during war operations.

The marine corps’ mission is to ground combat on land or at sea with amphibious assault vehicles such as tanks and helicopters. It also provides security at embassies during the war. In 1950, marine corps security guards helped their citizens evacuate to the United States embassy in South Korea during the North Korea’s invasion.

The coast guard is handled by the Department of Homeland Security but can be transferred to serve under the Department of defense dod (Navy) during times of war or conflicts involving U.S. interests overseas. Their areas of responsibility include managing six maritime operation missions, which are the following:

Who are the largest defense companies in the U.S.?

The top American defense companies are worth billions of dollars and employ more than ten thousand people. They also have substantial political influence in Washington D.C., where they lobby lawmakers on issues ranging from military spending to corporate tax rates.

A few federal agencies hire these large companies as contractors to do engineering work or manage projects related to military technology or equipment purchases such as the Department of Defense and the Department of Homeland Security.

It works on multiple business segments such as:

The majority of Lockheed Martin’s business comes from the government agencies, mainly the Department of Defense, but it also sells products to other clients commercially and internationally.

Raytheon Technologies is driving the future of defense and civil solutions. Its products include:

It partners with U.S. and international customers in over 80 countries to provide an integrated portfolio of capabilities to support its client’s mission. Raytheon is a company that employs about 174,000 people worldwide who are committed to building safer, more secure, and more reliable products to meet the world’s most demanding challenges.

Raytheon has been at the center of innovation since it began in 1922 as the American Appliance Company. Today, it’s a global defense leader serving the federal government, civil agencies, and commercial customers with innovative solutions in aerospace, cyber, electronics, and advanced manufacturing.

General Dynamics is an American aerospace and defense conglomerate. The company has four business segments, namely the:

How does U.S. defense spending compare to other countries?

The United States spends a great deal of money on defense compared to other countries. US military spending amounted to $801 billion in 2021, a drop of 1.4 per cent from 2020. The US military burden decreased slightly from 3.7 per cent of GDP in 2020 to 3.5 per cent in 2021. This comprised 38% of the year’s total military spending worldwide. While the U.S. spends more than any other country, it’s worth noting that its nominal GDP is also the largest globally, at $20.49 trillion, according to International Monetary Fund.

The U.S. spends the most on national defense compared to India, China, Russia, Saudi Arabia, United Kingdom, Japan, South Korea, Germany, France, and Japan combined. This is because the U.S. has historically allocated most of its economy’s share to defense than most of its allies. The total discretionary defense and non defense spending purposes are about one-third of the yearly budget.

Reasons why the U.S. has the strongest military

The United States has always been the most dominant military force worldwide, mainly for its spending power, elite special force, and vast collection of combat units.

Unquestionably, it has the most powerful military, and it’s most than just its military size. It also has the most advanced military technology the world has ever witnessed. While they lag in military robustness, it’s not by manpower. China has undeniably the most active soldiers, with 2.19 million in number, while the U.S. only has 1.4 million. The U.S. superiority always lies in its unmatched technology.

Further, the U.S. never had a shortage in military spending, which usually takes up more than 10% of the federal budget. That is equivalent to more than $680 billion spent on tanks, boats, jets, and other new and advanced equipment yearly.

The number of military personnel is a significant contributing factor to an army’s strength but what sets the U.S. apart from other countries is its level of air superiority and naval prowess. The country’s military has over 2000 jet fighters, 960 attack choppers, special-purpose aircraft, and 900 air modes of transport.

The notable units are the following:

For the oceanside defense, the Navy has a total of 91 destroyers and 11 aircraft carriers. Aircraft carriers are essential for combat effectiveness during global conflict. Eleven units of aircraft carriers might not be a lot, but it’s five times what China owns. Also, China doesn’t have resources for its space. The U.S. can accommodate 85 to 110 fighters on their carriers. So, there’s no need to deploy jets from the mainland or military bases.