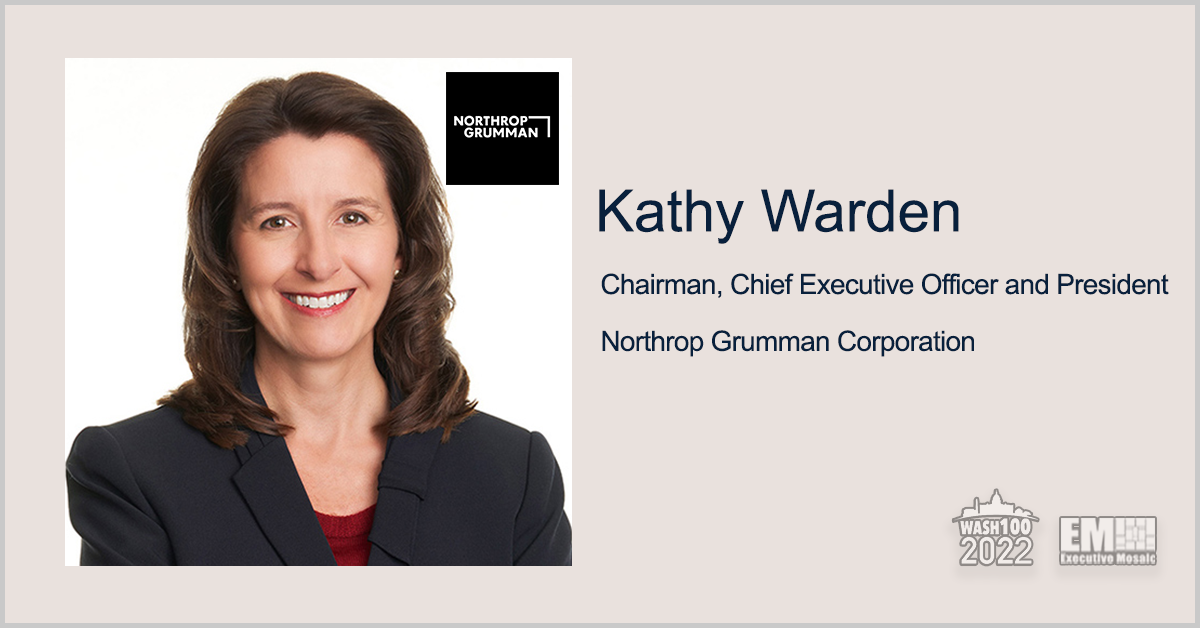 Executive Mosaic is pleased to announce Northrop Grumman CEO Kathy Warden as a recipient of the 2022 Wash100, the seventh time she’s won the prestigious award in the nine-year history of Executive Mosaic’s annual list of executives with staying power and influence in the government contracting sector.

Warden took the helm of the Falls Church, Virginia-based company as chief executive and president in January 2019 and she added the chairman title in August of the same year.

Visit Wash100.com to cast a vote for Kathy Warden as one of your 10 favorite GovCon leaders.

In a 2021 earnings call, she told investors cash generated through the sale of Northrop’s information technology services business to Veritas Capital drove an opportunity for capital deployment that surpassed free cash flow. The company returned a record $4.7 billion to shareholders via dividends and share repurchases during the past year, retired more than $2.2 billion of debt and reported space systems segment sales for its 2021 fiscal year grew 21 percent to $10.6 billion, following the sector’s record $8.7 billion sales the previous year.

Warden pointed to the Dec. 25 launch of the James Webb Space Telescope, which Northrop built for NASA, as “one of our proudest moments” in the fourth quarter.

“Webb will peer more than 13.5 billion years into the past when the first stars and galaxies were formed, ushering in an exciting new era of space observation and expanding our understanding of the universe,” said the seven-time Wash100 winner.

Prior to the JWST deployment, the agency awarded the company a $3.19 billion contract for solid rocket booster production and operations work over the next decade to support the Space Launch System and Artemis missions.

Northrop has additional efforts to support NASA’s moon exploration program, including a project to build the Habitation and Logistics Outpost module for the future Gateway lunar space station under a $935 million contract. Additionally, the company formed a teaming arrangement with AVL, Intuitive Machines, Lunar Outpost and Michelin to design a terrain vehicle offering in a joint bid to help U.S. astronauts travel around the lunar surface.

Also in December, Northrop won a five-year, $1.38 billion contract to produce as many as 160 Integrated Battle Command Systems for the U.S. Army and its foreign partners.

In an interview on CNBC’s “Squawk on the Street”, Warden noted that the company’s $13.3 billion Ground-Based Strategic Deterrent program with the U.S. Air Force to replace the Minuteman III intercontinental ballistic missile is “progressing well on cost and budget.”

In July, Northrop broke ground on its state-of-the-art Hypersonics Center of Excellence in Elkton, Maryland, that will apply digital engineering approaches to help military customers develop weapons systems intended to travel at least five times faster than the speed of sound.

In addition to missile defense and space exploration, Northrop pursues opportunities in artificial intelligence R&D and seeks to align its AI development efforts with the Department of Defense’s principles for developing secure and ethical AI systems. Warden said in an interview through the Center for Strategic and International Studies that she forecasts new companies will adapt commercial AI and machine learning platforms for military surveillance, command and control applications.

Warden intends to prioritize Northrop’s workforce in 2022 as the defense industry experiences additional business challenges due to a chronic labor shortage.

“We’ll continue to navigate through these COVID-related impacts,” she told CNBC in December. “The industry has been able to do that over the last 21 months and we anticipate we’ll be able to do that going forward.” 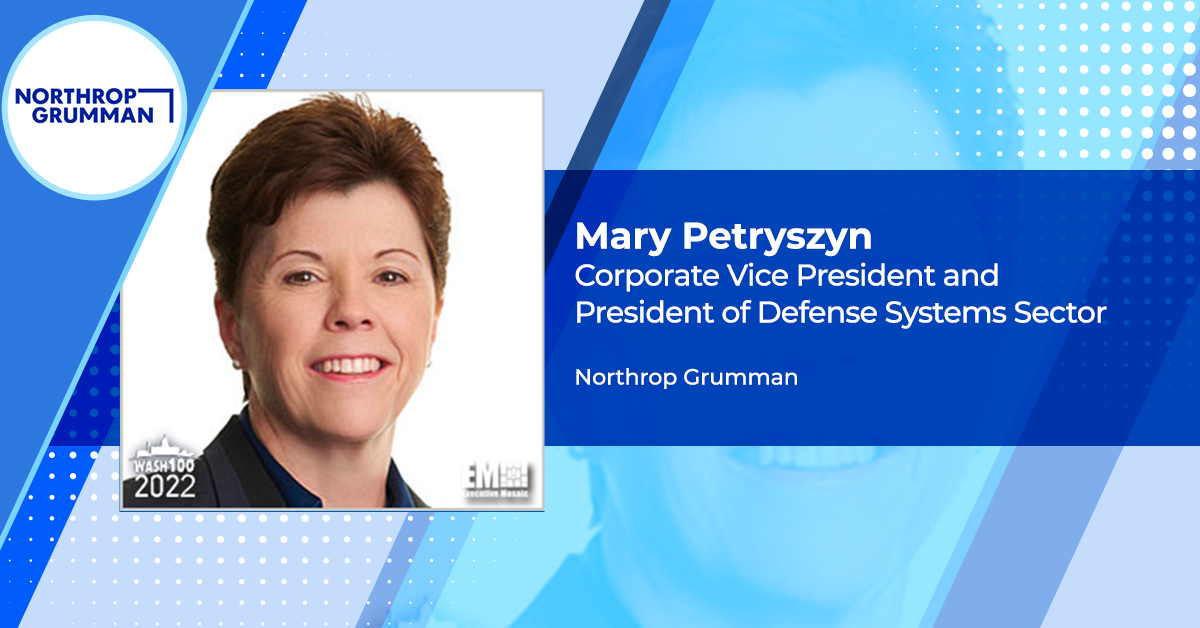 Mary Petryszyn, corporate vice president and president of the defense systems sector at Northrop Grumman (NYSE: NOC), intends to retire on Jan. 13, 2023, after a decadelong career at the company. Northrop said Thursday its board of directors chose Roshan Roeder, VP and general manager of the airborne multifunction sensors division under the mission systems 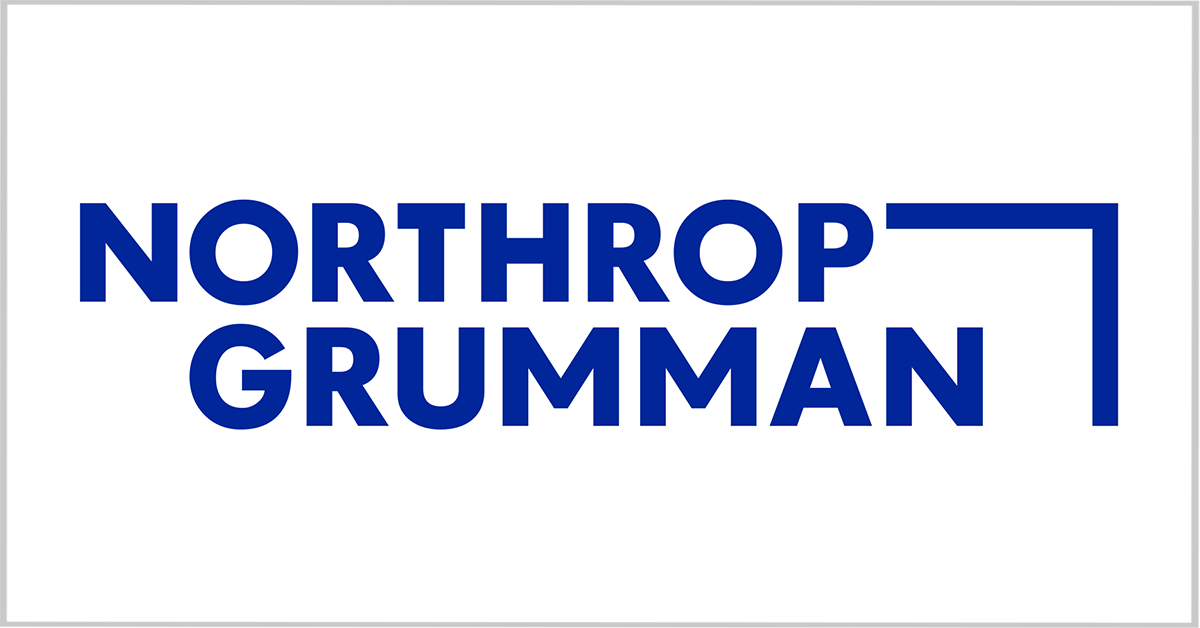 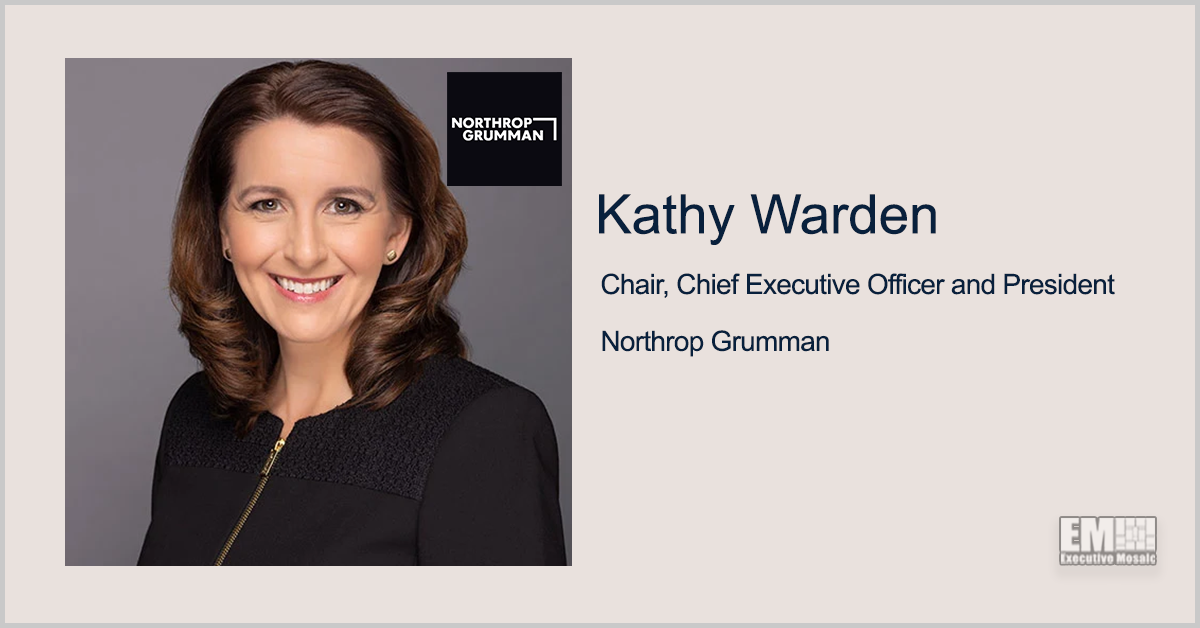