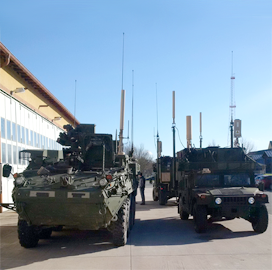 John Wojnar, director for cyber and electronic warfare strategy at Lockheed Martin stated that the company will integrate its system with international partners and the Army.

The Army awarded Lockheed a $6 million other transaction authority contract in May 2020 to build the first phase of the Terrestrial Layer System-Large. Boeing‘s Digital Receiver Technology subsidiary was awarded a $7.6 million contract under the same program.

The two companies will build and outfit their systems to Stryker vehicles during the 16-month-long phase one, while also participating in operational assessments, after which the Army will choose one company to move on.

Lockheed has been in partnership with coalition members to advance the architecture designs to maximize effectiveness on the battlefield. Lockheed’s system was awarded as an internal research and development project. Under the contract,  the company will advance its aerial cyber/electronic warfare system, Silent Crow.

The work that will be ongoing between Aug. 2020 and summer 2021, when the first phase of TLS has been projected to finish. Under phase one, Lockheed Martin will  provide the component parts developed internally and externally have been acquired and integrated into the ground vehicles, as well as conducting a variety of software drops.