Over 200 industry professionals were attendance on Wednesday as the Potomac Officers Club convened at the Defense Research and Development Summit to discuss the programs that those in the intelligence community know that they cannot talk about without a clearance.

Given the rapid pace that technology advances in the private sector, the Department of Defense and other agencies have placed increased emphasis on how industry can aid in the inception of advanced defense technologies. Military might and commercial communication is key to ensuring that the U.S. remains at the head of the pack, continuing to light the way for others with innovations in the defense sector.

To kick things off, DARPA Director Walker began discussing the defense capabilities currently available, and what the agency is doing to develop new methods of helping the modern warfighter. In defending the homeland there is an undeniable strong connection between strategy and threat-based scenarios, using advanced technology like detection algorithms to catch anomalies in large networks in charting the defense sector’s progress as it moves forward with modernizing electronic warfare capabilities, Walker said.

“What you should notice from the national defense strategy is that we are going back to the threat-based response as part of the U.S. cyber-comms moving forward,” Walker noted.

Walker is a proponent of cutting-edge technology–the Long-range Anti-ship Missile (LRASM) has the smarts on-board to fly a very survivable trajectory to its intended target while making on-board decisions; the “LUKE arm,” which is an advanced prosthetic arm for veteran-amputees named after the Jedi hero from George Lucas’ Star Wars films; the Advanced Plant Technologies program, looking to plants as the next generation of sensors that can be remotely monitored in responding to changing environmental stimuli and trigger discrete response mechanisms; and the Safe Genes program, to gain a better fundamental understanding of how gene editing and related technology functions can devise means to safely, responsibly and predictably harness data for beneficial ends.

The Navy is on track to implement this technology in the field this year, Walker says promisingly, as the Navy and DARPA work together to establish contracting mechanisms, and a joint-program office at DARPA, to avoid the 2-3 years wait in getting an acquisition program started.

“Moving directly from prototype development to early-operational capability has a potential to reduce the amount of time it takes to get a missile in the field by 50 percent,” he said. “How can we get this to be a regular part of our acquisition process?”

Walker stands firm on the assertion that the U.S. is making “amazing progress” in delivering capabilities to currently deployed warfighters, and veterans on U.S. soil. The ACT program, for instance, builds on the foundational technology already in place to develop common RF arrays for a wide variety of applications at a fraction of the cost. One of the outcomes of the program, he says, is the production of a nickel-sized chip that can do the same job at the same power level as a box more than 30 times its size.

“With the success of these programs, such technologies will deliver new sensing platforms that are energy-independent, robust, stealthy and easily-distributed, with applications going beyond that of military and defense,” Walker said.

The crowd listened intently as Walker explained how these technologies function at different scales under different environmental conditions across different generations of development. He assured everyone that neither advanced plant technologies nor safe genes are releasing modified organisms into the environment.

“We’re testing these technologies under controlled experimental conditions, where we’re looking to understand how the technology works and whether its capable of moving in a direction where we know how to stop, and where the brakes are,” he said. “This is an important space for DARPA to operate in, to understand what is out there, how it works, what’s coming and how to defeat it.”

Prior to his tenure at DARPA, Walker served as Deputy Assistant Secretary of the Air Force for Science, Technology and Engineering in the Office of the Assistant Secretary of the Air Force for Acquisition in Washington, D.C. His responsibilities were myriad, as he managed the development of technology investment strategies for the Air Force’s annual $2 billion science and technology program, providing functional management to more than 14,000 military and civilian scientists and engineers.

According to Walker, the systems in systems integration technology are most likely out of date, providing adversaries with an asynchronous advantage in the new highly-autonomous approach to warfighting that we see today. He refers to the “kill web,” in something he terms as “Mosaic Warfare,” a call-and-response in addressing pressing issues of national security.

“When you think about building a mosaic, you imagine small versatile building blocks, and complex designs out of that,” he said. “With lower costs and less complicated systems, the individual parts can work to provide an architecture that can build an invaluable capability for the whole. If an adversary can neutralize parts of this mosaic, then the other parts can respond with automation to achieve the desired effect. This moves far beyond the current universal standard.”

With over 30 years of experience in civil service, Walker spoke from a position of extensive experience when discussing developments in thrust-vectoring concepts, aero-acoustic prediction methodologies, and hypersonics.

Before he takes his leave as director, Walker wants to make hypersonic technology a reality, an ambition that is no longer a far-fetched space-age concept.

“To take a look at how we as a community can take advantage of advanced propulsion, glide technologies, and then work backward from the target you want to hit–you need to know what that system needs to look like,” said Walker. “We’ve been successful so far, and plan on flying both systems by the end of 2019. These are important capabilities for the U.S. in deterring our competitors. We ask questions like: Can you build an engine that will allow a hypersonic aircraft to take off, reach Mach-6, and do it over and over? DARPA is working with other companies to build and test on the ground–That’s a tech push program that only DARPA can take on and we’re doing it.”

In closing, Walker mentioned talks with the U.S. Army on hypersonic capabilities in long-range fires for the practice of combating competitors in contested environments. He also plugs the recently-issued DARPA “Subterranean Challenge,” a zero-human intervention contest in developing new methods of rapidly-mapping and navigating underground environments for a grand prize of $2 million.

“I’m personally excited by the work happening. In Research and engineering development, I think we haven’t thought about where we’re going to be in the future. The next-generation of technology will take us to the next step.”

Dr. Steven Walker was recently inducted into the 2018 Wash100–Executive Mosaicâ€™s annual selection of the most influential voices in the government contracting arena. 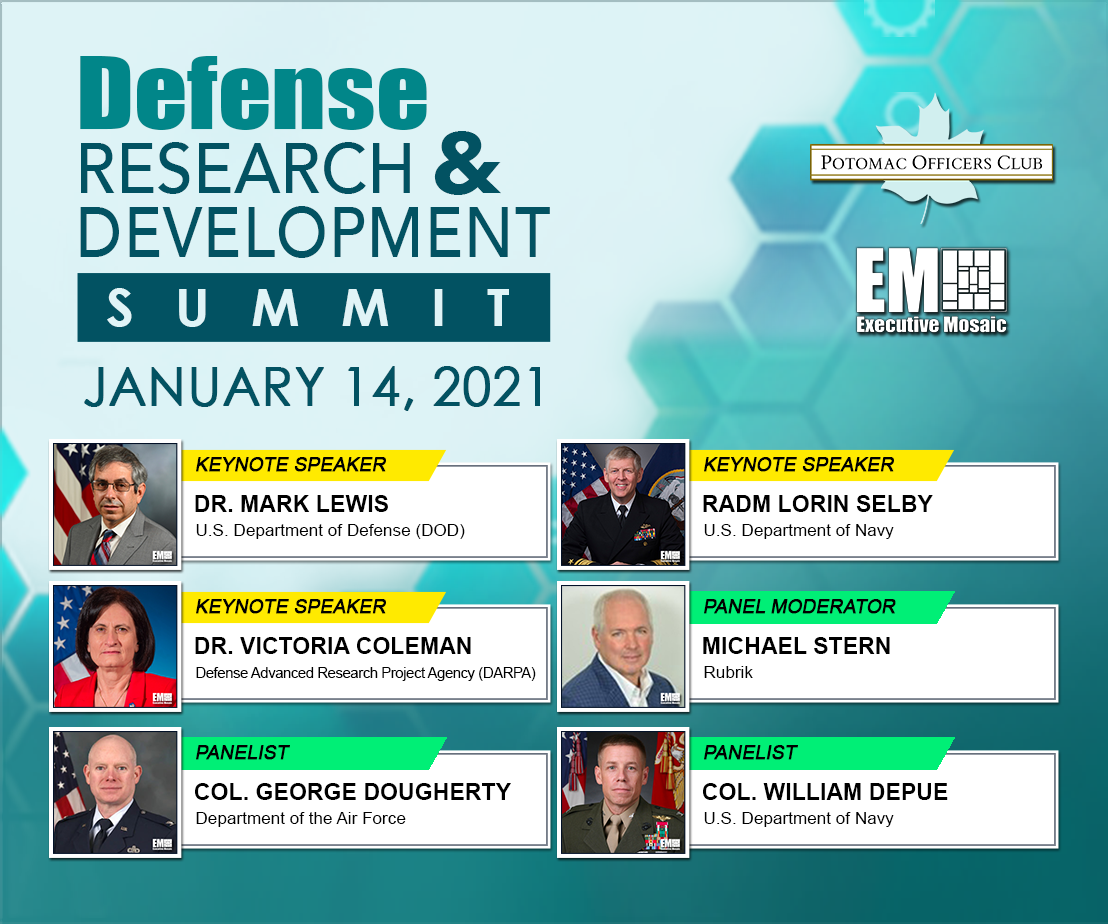 Dr. Steven Walker speaks at the Defense R&D Summit with His Slice on What’s Cutting-edge

Over 200 industry professionals were attendance on Wednesday as the Potomac Officers Club convened at the Defense Research and Development Summit to discuss the programs that those in the intelligence community know that they cannot talk about without a clearance. Given the rapid pace that technology advances in the private sector, the Department of Defense
Sponsor