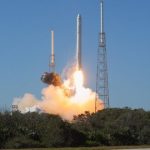 SpaceX has secured a $97 million contract from NASA to launch a satellite that will work to continue a long-term effort to measure the height of the global sea surface.

NASA said Friday it expects the Sentinel-6A spacecraft to lift off by November 2020 from Vandenberg Air Force Base, California, aboard SpaceX’s Falcon 9 rocket.

Sentinel-6A, also called Jason Continuity of Service, is a joint effort of NASA, the National Oceanic and Atmospheric Administration, the European Space Agency and the European Organisation for the Exploitation of Meteorological Satellites.

The mission is designed to provide ocean topography measurements to continue the record of global sea surface height data that began in 1992.

NASA added that Sentinel-6A will also employ the Global Navigation Satellite System radio-occultation sounding technique to measure temperature changes in the troposphere and stratosphere and to aid numerical weather prediction.