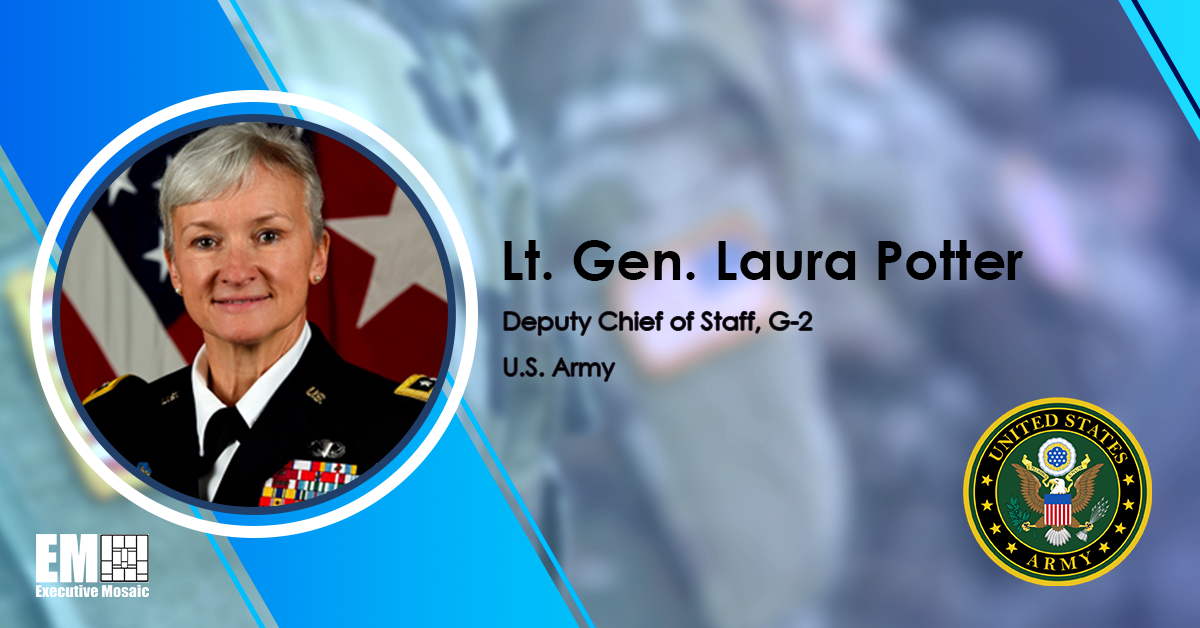 The U.S. Army is currently undergoing what Lt. Gen. Laura Potter calls, “the most significant intel modernization in Army intelligence history,” a wave of efforts to remake and galvanize the service branch by 2030.

These activities include a focus on sensor technologies, which, according to Potter, who serves as deputy chief of staff for G2 Intelligence at the Department of the Army, are frequently discussed as a schematic “data or message that fits into a reference architecture to deliver an effect.”

However, Potter reasons, while this is a key aspect of the evolution of sensing practices, there are ambiguities as well as a need for adaptability.

“We have to be oriented towards the speed of modernization for what we’re facing right now, because we are facing gray zone threats and that ebb and flow between peacetime and competition or campaigning to conflict,” Potter stated.

To properly situate priorities, Potter explained in her closing keynote address at the Potomac Officers Club’s 7th Annual Army Summit that the Army must act and design their tools via “threat-informed” procedures; whether it is with regard to critical infrastructure, cybersecurity or acquisition strategy, practices need to be based on potential threat sources.

“We have to maintain an intelligence enterprise that is able to respond to everything from a high-end sophisticated peer or near-peer adversary to a small pocket of VEOs [violent extremist organizations] that turns into a crisis and requires a response force,” Potter remarked.

The Lieutenant General went on to stress the importance of maintaining data centricity in modernization efforts, via technologies that “continuously update to maintain relevance,” which she said is crucial, “given the volume and quantity of data updating.” This plays directly into the cross-service branch objective of uniting the joint forces through a Joint All-Domain Command and Control, or JADC2.

Potter reported that it is imperative for the data fabric of the Army to interact and function in tandem with the Department of Defense’s joint cloud and larger canvas of data fabric for the Army to reach its full intelligence capabilities. She cited her G2 team’s involvement in “help[ing] the Army define the tactical data fabric and help[ing] with shaping message formats and interoperability within our Tactical Intelligence Targeting Access Node or TITAN.”

The TITAN technology is a ground station tool that identifies and follows threats, assisting with long-range precision targeting and firing and using its automation tools to investigate large amounts of gathered sensor data.

As of now, Potter says the debut TITAN pre-prototype has been fielded to a multi-domain task force located at joint base Lewis-McChord and will be deployed as part of Capability Set 24 in fiscal year 2024 to replace legacy ground station systems, thus impacting sensing capabilities in the battlefield to a large degree.

TITAN is just one step toward the inception of an “enterprise intelligence data management and analytics platform,” which has been dubbed Capability Drop 2 and is based on the last few years’ work with the Army Intelligence and Security Command’s cloud initiative. This platform is another goal the service branch is hard at work to achieve by 2030.

There is still much to accomplish on this front. Among the items on the to-do list, Potter elucidated, is an ability to utilize data closer to its time of intake and to funnel that data into the construction of superior algorithms. Additionally, the Army seeks to “develop capabilities to sense in all domains to achieve collaborative and distributed sensing orchestration across intelligence and non-intelligent sensors to implement AI, ready sensing capabilities, and to achieve multi-role functionality for our sensors.”

Reaching this, especially in all three sensor layers — terrestrial, aerial and space — will require close partnership with members of the private sector, academia as well as other aspects of the government. But Potter is confident that if these sectors work together, the Army could find itself at a new frontier of situational awareness in just a few years.

The U.S. Army is currently undergoing what Lt. Gen. Laura Potter calls, “the most significant intel modernization in Army intelligence history,” a wave of efforts to remake and galvanize the service branch by 2030. These activities include a focus on sensor technologies, which, according to Potter, who serves as deputy chief of staff for G2 Intelligence