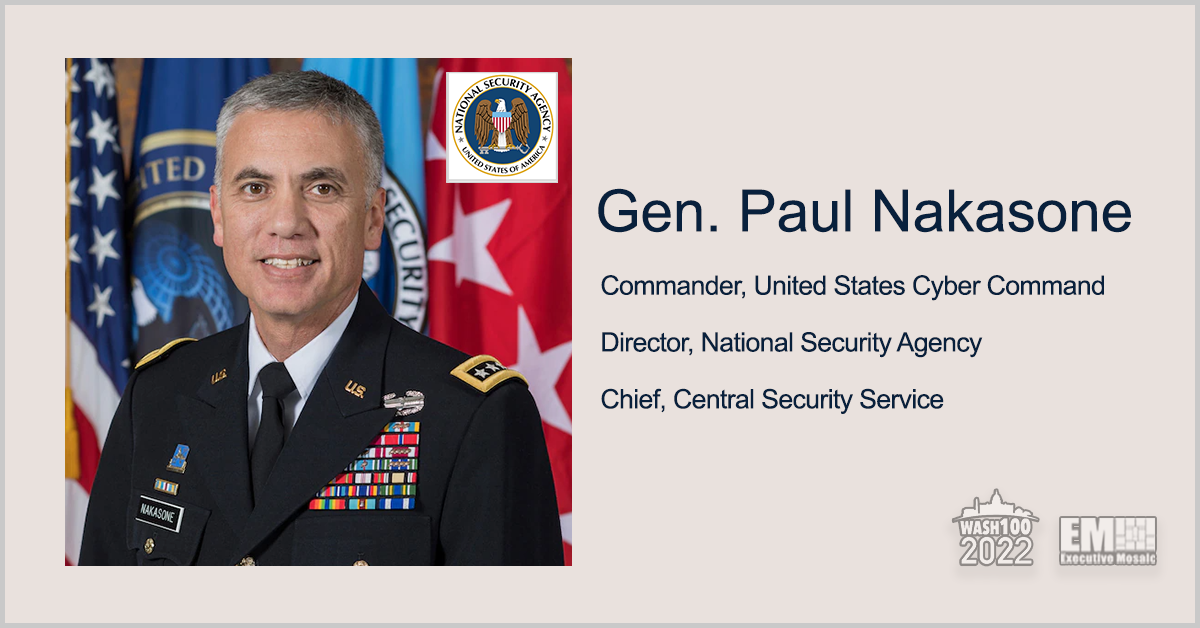 Executive Mosaic is honored to present Gen. Paul Nakasone, commander of the U.S. Cyber Command, director of the National Security Agency and chief of the Central Security Service, as a 2022 Wash100 Award recipient for helping the U.S. military and federal government boost their defenses against cybersecurity threats.

This marks the sixth consecutive Wash100 Award for Nakasone, who previously served as commander of U.S. Army Cyber Command and led the Cyber National Mission Force at Cybercom. Visit Wash100.com to cast your votes for Nakasone and your other favorite GovCon leaders.

Speaking to the Armed Forces Communications and Electronics Association, Nakasone said Cybercom and NSA are working with the U.S. government, commercial companies, academia and international allies to achieve and maintain dominance in the cyber domain and stay ahead of the increasingly becoming sophisticated adversarial threats.

“Our adversaries are operating with a scope, scale and sophistication unlike anything we’ve seen before,” Nakasone said. “Today, our adversaries are targeting and infiltrating our systems by exploiting supply chain and zero-day vulnerabilities, and our adversaries are demonstrating a new risk calculus that has changed the traditional threat landscape.”

In order to address this challenge, Nakasone said the U.S. must take action to achieve resiliency and raise the standard for cybersecurity.

“We must raise the bar. We must be resilient, and we must act. Our success in the new era of strategic competition will rely, in part, on our ability to develop partnerships of all kinds that acknowledge shared risks, shared goals and shared solutions,” the commander said.

During the WEST 2021 defense conference in June, Nakasone highlighted the importance of what he called “unity of effort” to counter cyberattacks and protect weapons systems and military data.

“Events on the virtual battlefield can reflect and inform events on the physical battlefield,” said Nakasone, adding that an effective cybersecurity initiative will require a “shift in our posture, a shift in our thought processes, to return to a focus on these kinds of near-peer threats.”

In addition, Nakasone said, it is crucial for the U.S. government to build relationships with the industry and academia amid evolving cyber threats. Through the Cybersecurity Collaboration Center, NSA works with more than 100 companies in the defense industrial base and their security providers. The agency also has contracts with over 1,800 large or small businesses and academic institutions.

“The technology, services and products provided via these partnerships underpin all of our operations and provide robust security to our nation,” Nakasone said.

One of the priorities of Cybercom and NSA is to ensure the security of the 2022 midterm elections and prevent foreign adversaries from interfering with the upcoming polls. Nakasone said the command is working to gather information on threat actors and facilitate a seamless information exchange with partner agencies including the Cybersecurity and Infrastructure Security Agency, National Guard Bureau and the FBI.

Speaking before a Senate Armed Services Committee hearing, Nakasone explained the importance of Cybercom’s partnership with NSA in protecting U.S. elections from foreign interference. He cited the creation of an election security group consisting of teams from NSA and Cybercom.

According to Nakasone, Cybercom carried out more than 2,000 operations during the 2020 elections to prevent foreign cyber actors from tampering with the democratic processes in the U.S.

Among the most notable cyber incidents on U.S. criticial infrastructure were the cyberattacks launched against SolarWinds and Colonial Pipeline. In his opening keynote speech at the eighth CYBERCOM Annual Legal Conference, Nakasone said Cybercom plays a “key role” in the U.S. government’s ongoing response to the SolarWinds hack and touted the command’s “defend forward” concept that involves offensive operations against adversaries.

Another priority for Nakasone is to grow the U.S. government’s cybersecurity workforce amid the stiff competition for cyber talent with the private sector. Nakasone said that the increasing demand for cyber skills across the Department of Defense has underscored that the current 133 teams within the cyber mission force are not enough.

“The strategic environment has changed since the original CMF was designated in 2012. Added forces will ensure USCYBERCOM can fulfill its responsibility as both a supported and a supporting command,” Nakasone added.

Executive Mosaic congratulates Paul Nakasone and the Cybercom, NSA and CSS teams for their selection in the 2022 edition of the Wash100 Award.

Executive Mosaic is honored to present Gen. Paul Nakasone, commander of the U.S. Cyber Command, director of the National Security Agency and chief of the Central Security Service, as a 2022 Wash100 Award recipient for helping the U.S. military and federal government boost their defenses against cybersecurity threats. This marks the sixth consecutive Wash100 Award for Nakasone,

Gen. Paul Nakasone, commander of the U.S. Cyber Command, director of the National Security Agency and chief of the Central Security Service, has been recognized with his fifth consecutive Wash100 Award, the most prestigious award in all of government contracting (GovCon). Visit ExecutiveBiz to read Gen. Paul Nakasone’s full 2021 Wash100 Award profile. To vote 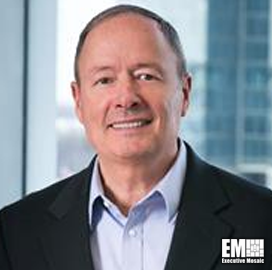 Keith Alexander, founder and co-CEO of IronNet Cybersecurity, has become the inaugural member on the advisory board of Ashburn, Va.-based security company Telos.