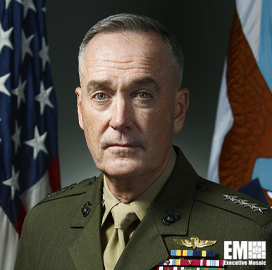 Joseph Dunford, a retired Marine Corps general and a previous Wash100 award winner, will join the board of directors of Lockheed Martin (NYSE: LMT) on Feb. 10.

He will serve on Lockheed’s classified business and security committee and nominating and corporate governance panel, the company said Friday.

Dunford’s “experience in complex, global operations and risk management, including cybersecurity threats, is a tremendous asset and will enhance board oversight in key business areas,” said Marillyn Hewson, Lockheed chairman, president and CEO and a 2020 Wash100 award winner.

Dunford is a more than four-decade Marine Corps veteran whose career culminated with his appointment as the 19th chairman of the Joint Chiefs of Staff in 2015. He previously served as the 36th commandant of the Marine Corps and commander of all U.S. and NATO forces in Afghanistan.