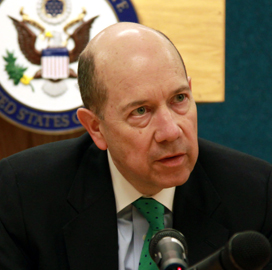 The retired U.S. ambassador will lead the company’s Washington regional office — which is based in Reston, Va. — and also oversee work for current customers and to develop new business pipelines, SGO said Wednesday.

He supported international anti-crime programs in more than 80 countries while at the State Department and also served as U.S.-Afghanistan coordinator.

Johnson has served on the company’s board of advisers since 2011.

His public service career also includes time as U.S. ambassador to the Organization for Security Cooperation in Europe and as charge d’ affaires at the U.S. embassy in London.