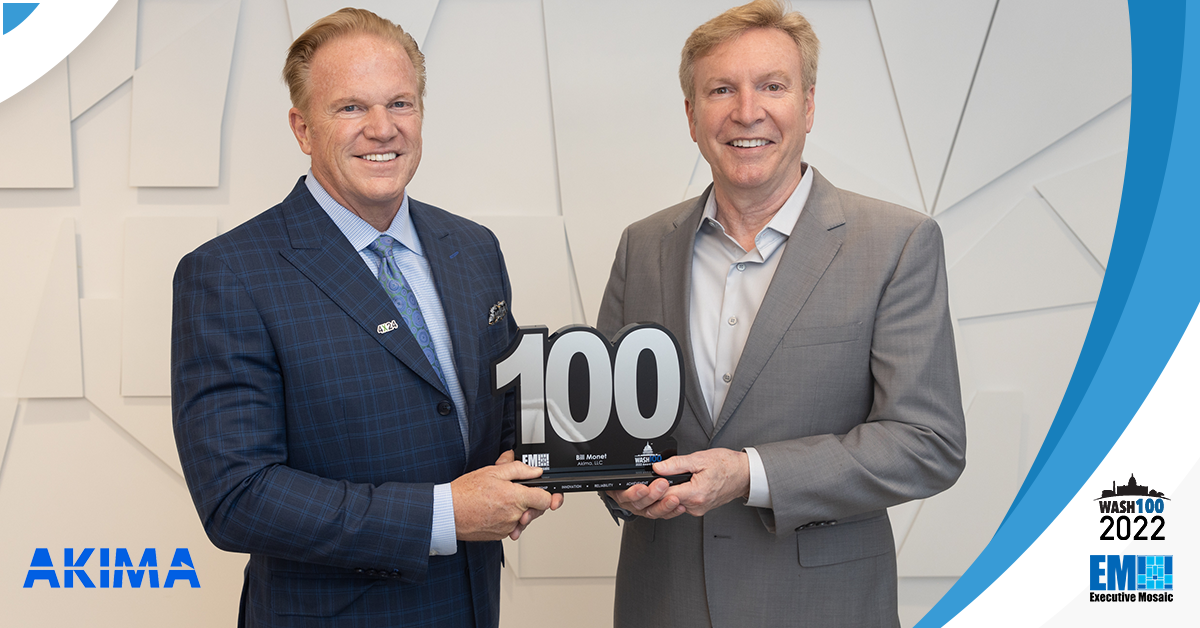 Bill Monet, president and CEO of Akima, was presented his 2022 Wash100 Award by Executive Mosaic CEO Jim Garrettson during a recent visit to the company’s headquarters in Herndon, VA.

Executive Mosaic is pleased to recognize Bill Monet as a three-time Wash100 Award winner, which demonstrates his visionary leadership in the government contracting (GovCon) community and his relentless commitment to Akima’s growth in the federal sector and service to its customers.

With his third consecutive Wash100 win, Monet has received the most prestigious award in all of government contracting for driving significant revenue growth for Akima through major contract award wins, executive moves and the continued delivery of mission-critical services.

As the president and CEO of Akima, Bill Monet manages more than eight thousand employees across 45 companies to drive excellence and operational growth for the company. He has led Akima through a decade of historic expansion and success, drawing on more than 30 years of experience leading organizations and driving growth through critical acquisitions and contract award wins.

In addition, the company also expanded its growth team in June with the appointment of Mike Alvarado, previously a 16-year veteran of Jacobs, who joined Akima as its chief growth officer to drive market share and revenue growth efforts alongside Bill Monet.

“He is a forward-thinking and strategic leader, and his expertise will play a critical role in aligning our strategic plan and organizational vision to best support our customers’ missions,” Monet said of the newly appointed CGO with Akima.

Executive Mosaic is pleased to recognize Akima and Bill Monet as a 2022 Wash100 Award recipient. As a three-time winner of the most coveted award in GovCon, he has demonstrated an elite level of accomplishment and contribution to the GovCon community that can only be recognized by the Wash100 Award.