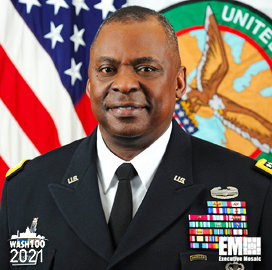 Defense Secretary Lloyd Austin has ordered a zero-based assessment of all advisory committees within the Department of Defense as part of a push to better align the efforts of advisory panels with the National Defense Strategy and other critical strategic priorities.

Austin, an inductee into Executive Mosaic's Wash100 for 2021, signed a Jan. 30 memo directing the interim director of administration and management to lead the zero-based review in consultation with DOD’s acting general counsel and submit final recommendations on each committee by June 1, the Pentagon said Tuesday.

The review includes any advisory panel that is not subject to the Federal Advisory Committee Act.

“As an interim step, I am directing the immediate suspension of all advisory committee operations until the review is completed unless otherwise directed by myself or the Deputy Secretary of Defense,” he wrote in the memo.

All members serving on advisory panels where the approving authority is the defense secretary or “where statute authorizes another DOD civilian officer or employee, or Active Duty member of the Armed Services to act as the DOD approving authority” have been directed to conclude their service no later than Feb. 16.

Each advisory panel sponsor will come up with an in-depth business case that should consider potential functional realignments to form a single cross-functional advisory panel and assess the committee’s function and mission in relation to the National Defense Strategy and the Pentagon’s strategic priorities, among others. Each business case should be backed by “fact-based evidence” for continued use of the committee.

The memo listed a total of 42 advisory committees subject to the department’s zero-based review.