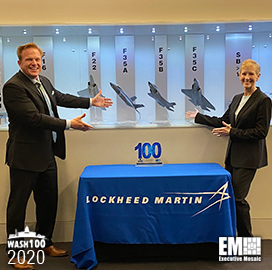 In particular, her efforts to drive production and aeronautics technology throughout 2019 for Lockheed Martin have earned Evans her first Wash100 Award, the most prestigious and coveted award in all of government contracting (GovCon).

In December 2018, Lockheed Martin and Airbus announced a memo of agreement to formally explore strategic tanking opportunities for the U.S. government. Lockheed Martin and Airbus communications team issued a joint photo release of executives meeting at the Paris Air Show in support of the MOA announcement in June 2019. The companies continue to work together to identify and support strategic tanking solutions for the U.S. Air Force.

“We believe with Airbus’ and Lockheed Martin’s expertise in air refueling and innovative, combat-tested technologies such as low observability and networking operations, we make a powerful team to address the U.S. Air Force’s tanker needs today and into the future,” said Evans.

In addition, the company celebrated the opening of an F-16 aircraft production line at a newly refurbished hangar in Greenville, S.C. Additionally, F-35 modernization efforts will continue and include automated collision avoidance features and a 40 percent increase in fuel tank capacity. Evans also spoke about the company’s plans to install “sixth generation” updates to its fifth-generation F-35 fighter jets.

“This is an exciting time as we celebrate another important milestone for the F-16,” said Evans. “The future is bright, and it begins right here in Greenville, South Carolina ‒ the new home of F-16 production.”

Executive Mosaic congratulates Lockheed Martin and Michele Evans on her 2020 Wash100 Award selection. Her efforts to drive aeronautical technology capabilities and drive Lockheed Martin’s aircraft production have demonstrated her leadership and commitment to achievement in the GovCon industry.

Michele Evans, executive vice president of Lockheed Martin’s Aeronautics business, was presented her first Wash100 Award for advancing aircraft technological capabilities and forming strategic partnerships. In particular, her efforts to drive production and aeronautics technology throughout 2019 for Lockheed Martin have earned Evans her first Wash100 Award, the most prestigious and coveted award in all of government contracting (GovCon).