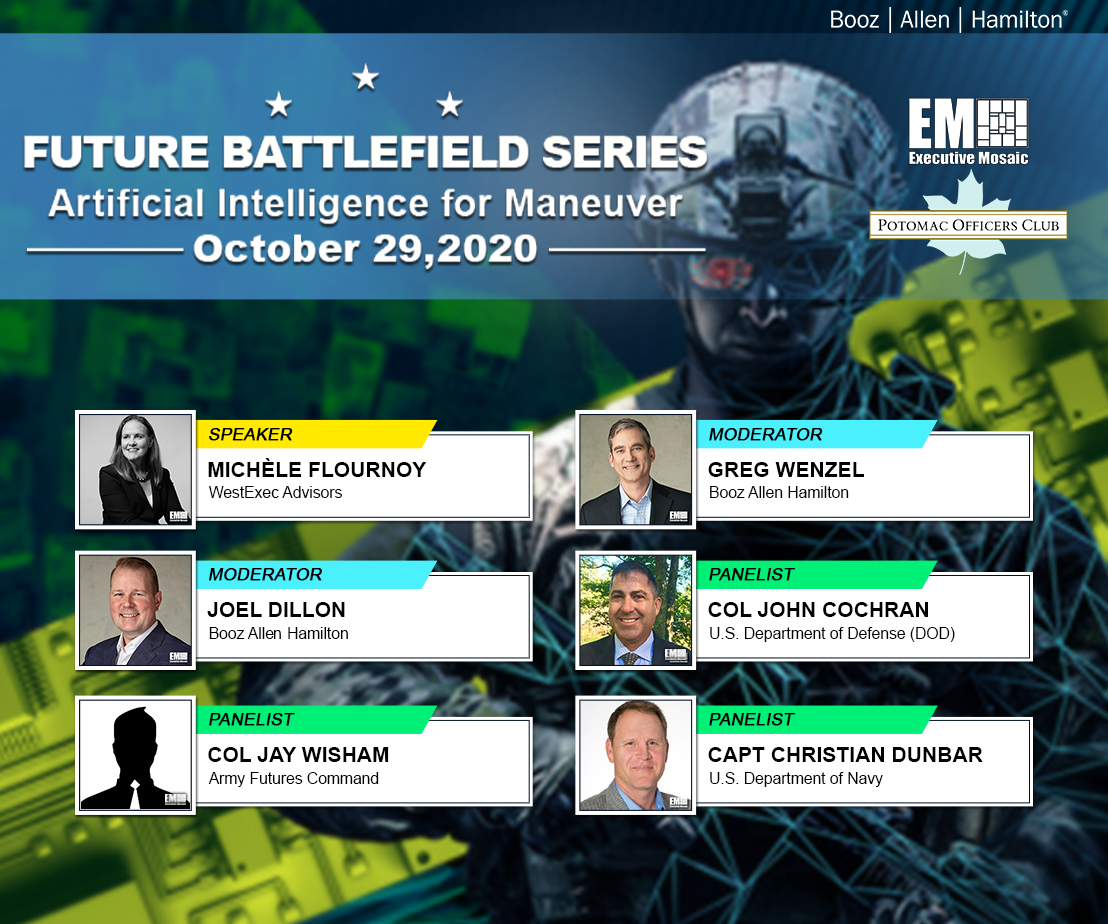 Joel Dillon, vice president of Global Defense and the leader of Booz Allen Hamilton’s portfolio for the U.S. Army, acted as the moderator for an impressive expert panel during the recent Artificial Intelligence for Maneuver Virtual Event as a part of Booz Allen’s ‘Future Battlefield Series with Potomac Officers Club (POC) on Oct. 29th.

Dillon began by sharing his gratitude to keynote speaker Michèle Flournoy, co-founder and managing partner of WestExec Advisors, and fellow moderator Greg Wenzel, executive vice president for Booz Allen and two-time Wash100 Award winner, for their remarks during the first half of the event.

After introducing himself, Dillion set the stage for expert panelists Col Jay Wisham of the Army Futures Command, Col. John Cochran of the Department of Defense (DoD) and Capt. Christian Dunbar of the Department of the US Navy (DON) to discuss how the advancement of emerging technologies, most notably artificial intelligence, is impacting our strategy,

Col. John Cochran, from director of the Secretary of Defense’s Close Combat Lethality Task Force and AI for Maneuver Working Group for DoD, began the panel discussion by asking why is artificial intelligence maneuvering so important.

“If you prescribe to the belief that the acceleration and convergence of exponential technologies will reshape every industry over the next decade, and that artificial intelligence is a cornerstone of that acceleration, then we have to move towards creating those changes for our future.

Col. Cochran stressed the importance of moving forward to allow and create our nation’s improved survivability in our combat formations. He discussed our need to extend our technical overmatch over our rivals to display our value proposition and continue to build momentum and develop our strategic investment for our joint combat force.

Following his remarks, Capt. Christian Dunbar, director of Future Concepts and Innovation for DON, described his mission to explore horizon and disruptive technology in order to transform and avoid surprises on the battlefield.

“Maneuver strategy is about making better decisions faster than your adversaries as well as getting to the concept of swarming based on speed, mass and the decision cycle,” he said.

One of the main focus areas is how to apply AI to warfare and the seven pillars of warfare (maneuver, intelligence, C2, fire and affects, protection and information).

“I am not an acquisition officer or a technologist. I’m a good example of the end-user who is very fluent in technology.,” said Col Jay Wisham, former Artificial Intelligence Applications and Program Director for the Army Futures Command’s (AFC) Project Convergence and the third panelist.

“I’m intentionally motivated by people telling me that something isn’t possible,” Col Wisham explained as he detailed his innovation experiences as well as the tools and systems that he’s used and developed.

He explained that his focus with AFC was to work with research universities to figure out the Army’s capabilities and what we’re already spending money on as well as spending the bulk of his time building Project convergence to learn how to fight at the small unit level.

“Having that end-user focus was always at the front of my mind. I was always the guy trying to improve what we had available,” which is a similar mindset that I share with Col. Cochran and Capt. Dunbar. “We’re operators with a mindset that is much more problem-oriented and we don’t take no for an answer.”

After setting the stage, all three panelists along with moderator Dillion explored the work that our service branches are doing to mitigate current joint force capabilities, reduce effectiveness DoD’s tactical maneuver elements, and leverage advances in artificial intelligence and machine learning algorithms in support of robotic autonomous systems and other capabilities to bring greater precision, certainty, speed and mass to the battlefield.

Executive Mosaic is pleased to present Leanne Caret, president and CEO of Boeing Defense, Space & Security (BDS), as an inductee into the 2021 Wash100 Award for driving innovative solutions across the technology and defense landscape, as well as spearheading investments to grow the BDS business unit. This marks Caret’s fifth consecutive Wash100 Award. She
Sponsor