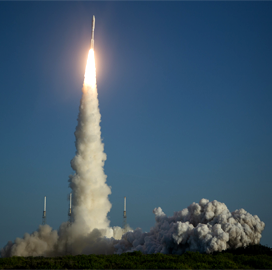 NASA said Thursday the spacecraft transmitted its first signal to ground controllers through the agency’s Deep Space Network an hour after launch and entered safe mode in the next few hours as indicated by telemetry data.

The rover will travel for seven months and is expected to reach the planet’s Jezero Crater to study the landing site’s geology, demonstrate technologies in support of future human and robotic space exploration and collect and return rock samples to Earth.

Aboard the rover are the Sample Caching System and the Ingenuity Mars Helicopter, a technology demonstrator that will perform up to five controlled flights. Perseverance also features seven instruments, including the Mars Oxygen In-Situ Resource Utilization Experiment or MOXIE, which seeks to demonstrate the ability to turn carbon dioxide into oxygen.

"With the launch of Perseverance, we begin another historic mission of exploration," said NASA Administrator and previous Wash100 Award winner Jim Bridenstine. “Now we can look forward to its incredible science and to bringing samples of Mars home even as we advance human missions to the Red Planet.”

The Mars 2020 mission is part of NASA’s Moon to Mars exploration program and the agency’s Jet Propulsion Laboratory will oversee operations of the rover.

ULA said the Atlas V 541 rocket supported Mars 2020, which marks the 20th mission of the joint venture of Boeing (NYSE: BA) and Lockheed Martin (NYSE: LMT) to the red planet.