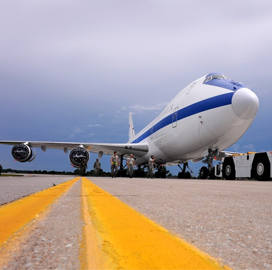 The Air Force has issued a presolicitation notice to seek information on a new aircraft to replace its fleet of legacy E-4B National Airborne Operations Center planes.

A notice posted Wednesday on beta SAM website says the proposed Survivable Airborne Operations Center Weapon System aircraft will be a key National Military Command System component in support of the president, defense secretary and the Joint Chiefs of Staff.

The SAOC aircraft will provide U.S. forces with command, control and communications capabilities and help coordinate actions by civil authorities and implement war orders in the event of a national emergency. It will be a commercial derivative aircraft with communications, C2 and network subsystems.

The Boeing-built (NYSE: BA) E-4B aircraft has been in service since the 1970s and is a long-range high-altitude, four-engine plane with a command work space, communications and rest area, an operations team work area and a briefing room. It also supports the mission of the Federal Emergency Management Agency.

The government program office will hold an industry day at Hanscom Air Force Base in Massachusetts in February to discuss the SAOC program. Stakeholders have until Dec. 20 to express their interest in taking part in the event.