ERAPSCO to Produce Sonobuoys for Navy Under Potential $1B IDIQ 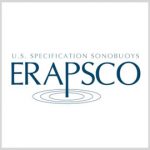 ERAPSCO, a joint venture of Sparton and Ultra Electronics, has been awarded a potential $1.04B contract to build and deliver sonobuoys to the U.S. Navy from fiscal 2019 through fiscal 2023.

Fifty-one percent of work will occur in De Leon Spring, Fla., and the remaining 49 percent will take place in Columbia, Ind.

The Pentagon expects ERAPSCO to finish services under the contract by September 2025.