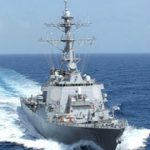 The gear is designed to transfer power from a pair of main gas turbine engines to propulsion shafts of the vessels, the Department of Defense said Wednesday.

Naval Sea Systems Command is the contracting activity and will initially obligate $147.4M in fiscal 2019 shipbuilding and conversion funds on the award.

Work will occur through November 2022 in California, Missouri, Pennsylvania, Massachusetts, Delaware, Wisconsin, Florida and other areas.

The award modifies a potential $1B contract originally awarded in 2016 to Philadelphia Gear, a Timken subsidiary.