Rob Davies, EVP of Operations for ViON, Completes His Third Season as 4×24 Chairman 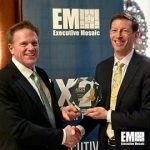 Rob Davies, executive vice president of operations of ViON, has received an award for his leadership role in Executive Mosaic’s 4×24 program, designed for the government contracting industry’s senior and most influential executives.

Jim Garrettson, founder and CEO of Executive Mosaic, presented Davies with the Chairman’s Award for serving three years as a chairman of the company’s 4×24 leadership program. During his tenure as chairman, Davies hosted eight 4×24 dinners with GovCon leaders such as Ron Vitiello of the U.S. Customs and Border Protection, four-time Wash100 Award winner Robert Cardillo and 2019 Wash100 Award winner Emily Murphy.

Garrettson said that as a key leader and three-time chairman, Davies drove the community with his experience and guidance, which are among the critical factors in the success of the program. He noted that leaders who serve as chairman ensure that the pier-based events serve first and foremost the needs of the peer group itself.

We want to recognize Davies for investing his time and energy into the program to support his peers and the mission, he added.