On Wednesday, Feb. 13th, GovCon leaders from public and private sectors gathered at the Hilton in McLean, Va., for the Potomac Officers Clubâ€™s 2019 Artificial Intelligence Summit. The event featured three keynote speakers and two separate panels featuring some of the top experts in the artificial intelligence sector.

Following the opening keynote address from 2019 Wash100 award winner Dana Deasy of the Department of Defense, the first panel took the stage to discuss the advancements and challenges facing GovCon leaders and federal agencies in AI. The panel featured Derek Strausbaugh of Microsoft, Dr. Timothy Persons of the U.S. Government Accountability Office, Paul Scharre of the Center for a New American Security and another 2019 Wash100 awardee Anthony Robbins of NVIDIA.

Dr. Persons is an expert advisor to the GAO, Congress and other federal agencies regarding on the cutting-edge S&T, highly-specialized complex systems and original research studies in both engineering and computing. He led off the panel explaining that AI will influence most industries in the near future, including criminal justice, transportation, financial markets and several others.

â€œWeâ€™re curious how AI will influence the world, not if,â€ said Dr. Persons. He expressed the warning that the U.S. government needs to govern. There will be great technological challenges and obstacles in the problem space, but the real question shouldnâ€™t be, â€œIf I can or canâ€™t use AI for this purpose. The question should be how do we use AI to fix this problem.”

Paul Scharre is a senior fellow director of the Technology and National Security Program with CNAS, and heâ€™s involved in a range of research areas including technology, national security and AI. During the panel, Scharre discussed the realities of the AI race. For instance, the reality that the U.S. is a major player in AI, but itâ€™s not the major player. In fact, half of the top ten AI companies are Chinese companies. However, he believes the U.S. can use AI technology differently than China.

Scharre expressed his belief that there should be more awareness on the ethics of AI technology and itâ€™s important to understand who controls the technology and why itâ€™s being used. â€œWith AI, the opportunities are real and profound to use it across all services. The technology could be used by China to oppress and control people, or it could be applied to various commercial applications and be available to anyone. The new AI strategy should be consistent with American values and new systems should be built to be reliable and effective.

Derek Strausbaugh brings 18 years of federal and commercial industry experience in a variety of positions with a focus on consulting, software development, program and project management with a particularly strong focus on Microsoft’s technologies.

During the panel, Strausbaugh discussed the importance of bringing more awareness to AI initiatives. â€œThere wasnâ€™t a lightbulb moment. Artificial intelligence has been coming for a long time.â€

Strausbaugh wants to take a measured approach with AI to use the technology that we already have and get started before the U.S. falls too far behind. He believes the U.S. is still thinking too much about the long term possibilities instead of what can be done in the short-term. â€œWeâ€™re just getting the first AI initiatives to see whatâ€™s effective, get some data and build on that technology,â€ said Strausbaugh. An initiative he views to ensure AIâ€™s success in the U.S. is culture and bringing in the young generation to innovate and expand the capabilities.

Anthony Robbins received a 2019 Wash100 award for his leadership with NVIDIA and his effort to develop emerging technologies such as robotics, machine learning and AI. During the panel, Robbins expressed great concern that the United States isnâ€™t moving fast enough. â€œThere has been too much talking about AI and not enough moving forward.â€ He explained that itâ€™s middle management in the government thatâ€™s causing much of the delay and there needs to be a change.

â€œTechnology moves in cycles. Weâ€™re still working on cloud, but AI just came into the fold. Itâ€™s our responsibility to innovate and not wait for the acquisition process to change in the federal government. This is a team effort and we should be moving a lot faster than he currently are.â€

Following the first panel of the 2019 Artificial Intelligence Summit, Dean Souleles from the Office of the Director of National Intelligence continued the event as the second keynote speaker discussing the importance of data and using artificial intelligence as a tool rather than a solution.

In April, Potomac Officers Club will host the 3rd annual Border Protection Innovations and Technology Forum. You can reserve your seat for the eventÂ right here.

Potomac Officers Club (POC) hosted its 6th Annual Army Forum on Thursday to share the most recent news, initiatives and developments regarding how the U.S. Army is driving future capabilities to meet the demand and speed of the digital battlefield from the perspective of the elite executives addressing the challenges first hand. Following an opening 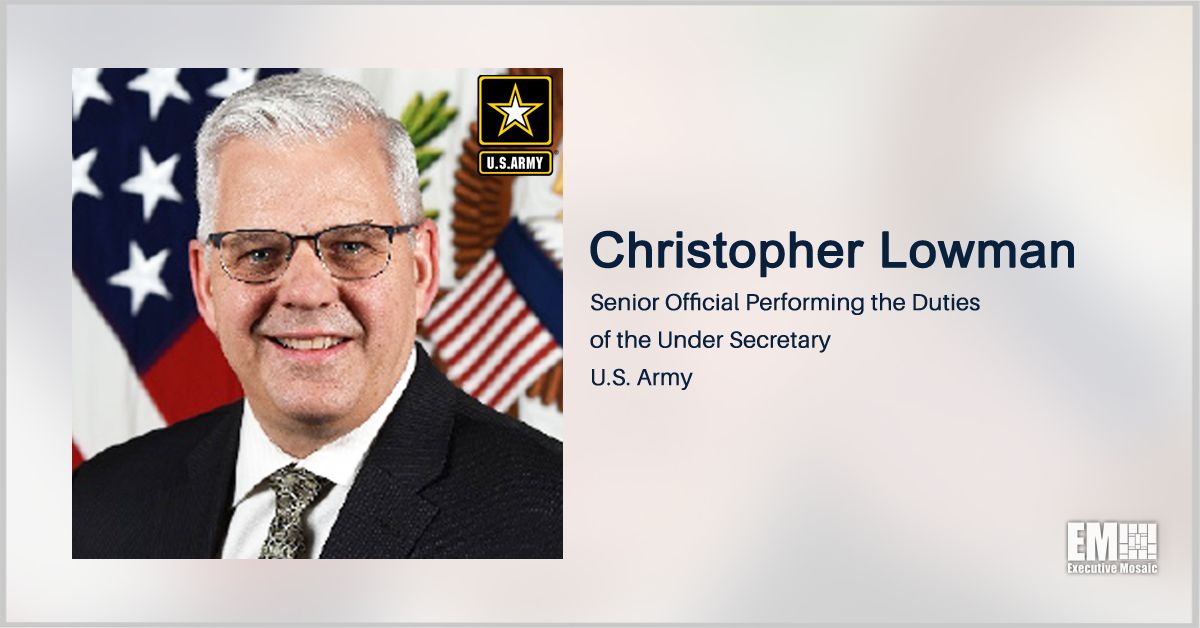 Potomac Officers Club (POC) hosted its 6th Annual Army Forum on Thursday to bring together some of the most notable federal and industry leaders to discuss how the Army will drive future capabilities to meet the demand and speed of the digital battlefield. Christopher Lowman, senior official performing the duties of the U.S. Army undersecretary,

On Wednesday, Feb. 13th, GovCon leaders from public and private sectors gathered at the Hilton in McLean, Va., for the Potomac Officers Clubâ€™s 2019 Artificial Intelligence Summit. The event featured three keynote speakers and two separate panels featuring some of the top experts in the artificial intelligence sector. Following the opening keynote address from 2019
Sponsor