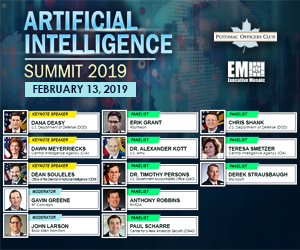 TYSONS CORNER, VA, January 29, 2019 — The Potomac Officers Club — a division of Executive Mosaic — will be hosting the 2019 Artificial Intelligence Summit on Feb. 13 at the Hilton-McLean in McLean, Va. Dana Deasy of the Department of Defense, Dawn Meyerriecks of the CIA and Dean Souleles of the Office of the Director of National Intelligence will serve as keynote speakers.

The summit will feature panel discussions on AI procurement and the technology’s role in mission support. GovCon executives will also discuss how industry can leverage AI to stay ahead of the curve.

The forum will be held on Wednesday, Feb. 13, at the Hilton-McLean, 7920 Jones Branch Drive in McLean, Va.

Software engineering company Tangram Flex has received a potential five-year, $95M contract to help the U.S. Air Force develop and deploy a platform based on the company’s system integration technology.