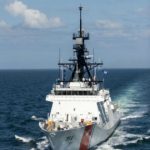 The high-endurance NSC spans 418 feet and contains a 54-foot beam, an aft launch and recovery section suitable for two rigid-hull inflatable boats and a flight deck for both manned and unmanned rotary-wing aircraft.

Ingalls Shipbuilding President Brian Cuccias said the contract will streamline the production of NSC components and support the company’s 422 suppliers in 40 states.

The Coast Guard will obligate advance procurement funds for the project.

HII’s Ingalls unit has provided seven of the Coast Guard’s flagship NSCs slated to replace the service branch’s 12 Hamilton-class high-endurance cutters that have been deployed since the 1960s.