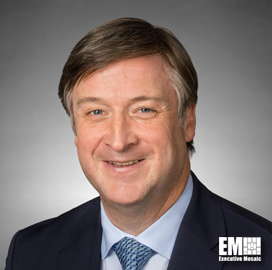 Robert Mullins, a 20-year aerospace and defense industry veteran, has been named senior vice president for corporate strategy and business development at Lockheed Martin (NYSE: LMT) in a move that takes effect Oct. 8.

He will serve as a corporate officer and succeed Stephanie Hill, who will transition to the role of deputy executive VP for Lockheed’s rotary and mission systems business on Oct. 8, the company said Monday.

Mullins joined Lockheed in March as VP of strategy and business development for the firm’s space business and previously worked at Cobham as executive VP for mergers and acquisitions and corporate strategy.

He held senior leadership roles at Orbital ATK and Northrop Grumman (NYSE: NOC) and spent four years at the RAND Corp. as an international policy analyst.

She came to Lockheed in 1987 as a software engineer and since then has served in various leadership positions, including business development and corporate strategy SVP and VP and general manager of cyber, ships and advanced technologies.