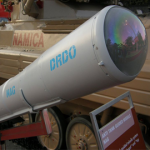 The Indian government said Friday the proposals include the procurement of the NAG missile system valued at approximately $78.8 million and 13 BAE Systems-built 127-mm-caliber guns for the country’s naval force worth $451.3 million.

The guns will be installed aboard naval ships to offer fire support against ground-based targets.

The Indian government added that the council also evaluated the Defence Research and Development Organisation’s program to build an airborne warning and control system.