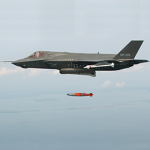 The Air Force will obligate the full amount of the contract option from its fiscal 2017 and fiscal 2018 missile procurement funds at the time of award.

The Naval Surface Warfare Center, Philadelphia Division has asked industry for proposals to organize and run a consortium that will carry out individual and collaborative prototype projects related to maritime sustainment technology concepts through its members.