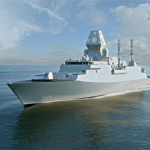 The company said Sunday the contract is expected to create at least 3,400 jobs across the U.K. and that it will begin the steel-cutting operation on the first ship in Glasgow, Scotland, in the next few weeks.

Woodburn added that the company is constructing five River-class patrol vessels for the British navy at its shipyards in Glasgow.

The Type 26 supply chain already has 33 companies that are working to deliver the combat vessels.