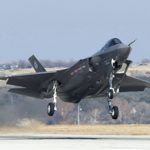 This will help recover diminishing manufacturing sources projected under the 15th Lot production of the F-35 aircraft, reports Nasdaq.com.

Forty percent of the contracted work will be for the U.S. Air Force; 20% for the Navy, Marine Corps and international partners. The work is to be done in Fort Worth, TX and is scheduled to be completed by March 2019.

Lockheed’s F-35 Lightning II, a single-seat, single-engine 5th Generation fighter, has three variants that are to replace five fighter jets in the U.S. Air Force, Navy and Marine Corps, and in at least ten other countries as well. The new F-35 is equipped with an advanced stealth feature, enhanced fighter speed and agility, fully fused sensor information, network-enabled operations and advanced sustainment. The F-35 has the world’s most powerful engine.

This contract modification will use fiscal 2016 research, development from the U.S. military branches as well as funds from international partners.

In February, Lockheed won an $8.5 billion DOD contract for the production of 90 F-35 fighters, the tenth installment at the lowest price to date, reports Nasdaq.com.