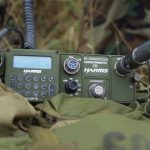 Harris (NYSE: HRS) has received $90 million in contracts from a European country for the delivery of tactical radios such as the Falcon II AN/PRC-150C and Falcon III AN/PRC-152A.

The company said Tuesday the radios will work to support the customer’s efforts to establish communications readiness and interoperability with U.S., NATO and coalition operations.

Harris secured the orders during the third quarter of its fiscal year 2017.

The Falcon series radio systems are designed to facilitate beyond-line-of-sight communications in environments without satellite connectivity as well as wideband voice and data communications to provide situational awareness.