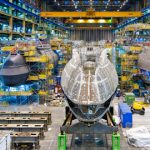 BAE Systems has received a potential $1.79 billion contract from the U.K.’s defense ministry to design and build a nuclear-powered attack submarine for the British navy.

BAE said Wednesday that Agamemnon will be the sixth of seven Astute-class submarines to be constructed at a company facility in Cumbria, England.

Each Astute-class submarine is powered by a nuclear reactor and designed to launch Tomahawk cruise missiles and produce  oxygen and fresh water.

BAE noted the HMS Astute, Ambush and Artful submarines are currently in service with the British navy while an additional four Astute-class submarines are in various stages of construction at the company’s Barrow-in-Furness facility.