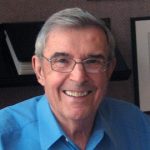 Beyster founded SAIC in 1969 as an employee-owned company and it has since grown to a company with $11 billion in annual revenue prior to its 2013 split into Leidos (NYSE: LDOS) and SAIC.

Dad passed away peacefully early this morning. The family was with him. He was wearing his favorite sailing clothes, including an America’s Cup jacket and his University of Michigan cap.

We all knew this day would come, but it’s never easy to say goodbye. Although this is a very sad time for our family, let’s celebrate the life of this remarkable man. He touched so many lives and gave to others selflessly.

We all want to make a mark on the world, and my father—Dr. J. Robert Beyster—really did. See a link to a copy of his obituary, which tells the story. We welcome comments on this blog.

Thank you for your love and friendship, and for being such an important part of Dad’s life.

Beyster retired from the company in 2004 and co-authored “The SAIC Solution: How We Built An $8 Billion Employee-Owned Technology Company, ” a book published in 2007 that details how he started the research and technology contractor and his career prior to SAIC’s founding.

We are deeply saddened by the death of SAIC’s founder Dr. J. Robert Beyster. His belief in employee ownership remained constant from the company’s start in 1969 to retirement as chairman of the board in 2004. In 2013, SAIC separated from its parent company and we are proud to continue to operate under a name that provided what he called ‘quality work on national security problems at a fair price.’ Dr. Beyster’s legacy and entrepreneurial spirit remain fundamental components of SAIC. We are grateful for his vision and for laying the foundation of SAIC’s values. Our thoughts and prayers go out to his family, friends and colleagues.

Roger Krone, CEO of Leidos, issued the statement below on Leidos’ website:

We are incredibly saddened by the loss of Dr. Beyster. In 1969 he was an accomplished physicist who founded SAIC, now Leidos, etching his scientific background into a company that would be driven by innovation and entrepreneurship. Over the past forty years his legacy has inspired the thousands of employees who followed his footsteps and influenced an industry that touches on all facets of American life. Our hearts and thoughts are with his family.