According to GeoEye, 98.3 percent of the shares voting at meeting voted in favor of the merger, representing 77.2 percent of that company’s total outstanding shares of common stock as of the meeting.

The company said it will announce the closing date and the election deadline for shareholders when it believes an announcement is “reasonably practicable, ” prior to the transaction’s closing, which both companies have said should occur in either the fourth quarter of 2012 or the first quarter of 2013.

The amount of cash and stock is subject to proration depending upon the elections of GeoEye shareholders, GeoEye said. 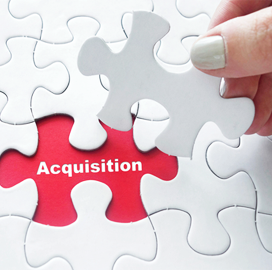 Shareholders at Aerojet Rocketdyne Holdings (NYSE: AJRD) voted Tuesday to approve the company’s $4.4 billion sale to Lockheed Martin (NYSE: LMT) and both parties still expect to close the transaction in the second half of this year. Aerojet Rocketdyne said Tuesday holders of approximately 99.76 percent of its stock were in favor of the merger

Northrop Grumman‘s (NYSE: NOC) board of directors has approved a quarterly cash dividend of 70 cents per share on the company’s common stock. The company will give the dividend to shareholders of record as of March 2, Northrop said Tuesday. Stockholders are scheduled to receive the payment March 18.
Sponsor