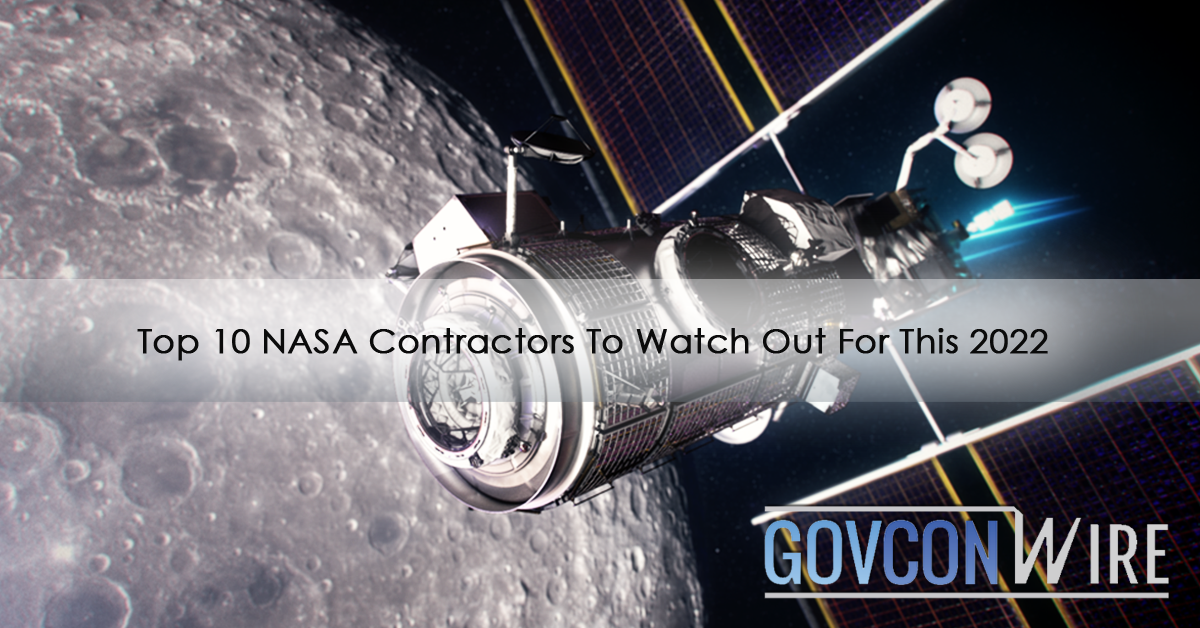 The National Aeronautics and Space Administration (NASA) stands at the helm of America’s science and technology efforts related to air and space. Launched in October 1958, the federal agency oversees the country’s space explorations and aeronautics research endeavors.

To maintain America’s edge in space and aeronautics technologies, NASA teams up with federal contractors. In fact, the federal agency spent more than $20 billion on government contracts in 2021 alone.

If you desire to do business with the agency, you should stay abreast with the biggest NASA contractors to give you a blueprint on how to thrive in this industry. So, here is a roundup of the Top 10 NASA Contractors you want to watch out for!

What They Do: The California Institute of Technology is a prestigious private research center located in Pasadena, California. Caltech is one of the leading science and engineering research institutes globally that puts America at the forefront of space technology.

Caltech works hand-in-hand with NASA for the federal agency’s Jet Propulsion Laboratory Program or JPL. The institution manages JPL that develops the latest spacecraft and rovers tech sent to distant planets–and even the Sun! Through JPL, humanity can explore the galaxy and gaze upon the stunning views of different celestial bodies.

In 2018, the California Institute of Technology won a 10-year $30 billion contract to continue its management of NASA’s Jet Propulsion Laboratory. According to NASA’s statement, Caltech will be on top of developing the laboratory’s critical programs such as aeronautics, astrophysics, heliophysics, Earth and planetary sciences, and space technology areas.

What They Do: Established by one of the world’s most controversial business magnates Elon Musk in 2002, the Space Exploration Technologies Corp is one of the leading interstellar transportation providers around the globe. Headquartered in Hawthorne, California, SpaceX manufactures spacecraft to send satellites and people to space more efficiently.

The spacecraft engineering company is also famous for its several historical feats, especially its recent International Space Station missions. SpaceX was the first commercially-owned spacecraft to deliver cargo to ISS successfully. This NASA contractor was also the first private spacecraft company to send humans there.

In 2014, SpaceX won a $2.6 billion federal contract from NASA to transport astronauts to and from the International Space Station (ISS). The spacecraft firm’s Dragon capsule will serve as the project’s U.S.-built engine for its launches.

And just recently, NASA has awarded an extension to the said contract valued at $900 million, which brings the total contract value to roughly $3.50 billion.

What They Do: The Maryland-based tech giant is world-renowned for its aerospace, arms, defense, and information security technologies. Lockheed Martin provides a wide array of services to the government–from satellites to deep space mission support.

Just early this year, Lockheed Martin won a six-year federal contract valued at $194 million. The Aerospace giant will develop the Mars Ascent Vehicle (MAV) to gather rock, sediments, and atmospheric samples from Mars. According to NASA, although the program will kick off in 2026, the federal agency’s early commitment to the development of MAV signals its commitment to its ambitious Martian exploration goals.

What They Do: The Texas-based engineering firm is one of the leading providers of construction, engineering, technical, and professional services. On top of that, Jacobs also offers cutting-edge space techs such as remote sensing and earth observation.

In 2020, Jacobs was hailed as Large Business Prime Contractor Of The Year by NASA for its stellar performance in managing NASA facilities and implementing ground systems capabilities.

With Jacobs’ commendable service as the current NASA contractor for the ATOM-4 contract, the engineering firm will extend its services with this five-year $209 million federal contract. The Texas-based contractor will be spearheading the ground test facilities and activities of NASA’s Ames Research Center in California.

What They Do: Famed for its commercial jumbo jets, The Boeing Company is one of the leading aerospace companies in the world. Headquartered in Arlington, Virginia, this space industry giant designs and manufactures aircraft, space systems, and defense products.

In line with NASA’s goal of launching astronauts to space using U.S.-owned technologies, The Boeing Company will lend its support in transporting both humans and cargo to the International Space Station (ISS).

After a three-year delay, the Virginia-based aerospace company just launched its test flight last May 25, 2022.

What They Do: Northrop Grumman is a multinational aerospace and defense company. The Virginia-based contracting giant is a specialist in manufacturing defense and space technology and IT products and services. Employing more than 90,000 talents, Northrop Grumman is a force to be reckoned with in the space industry.

Awarded initially in 2003, Northrop led the development of the JWST, the world’s largest and most powerful cosmic telescope designed to conduct infrared astronomy. This means that the JWST can view celestial bodies even from billions of light-years away.

What They Do: After acquiring Wyle, Inc., a federal contracting firm specializing in providing engineering, scientific, technical, and professional services to the U.S. government, the KBR, Inc. grew further as an international aerospace and defense giant. KBR Wyle Services continues to dominate the field and received multiple awards as NASA prime contractors.

The Texas-based federal contracting giant was awarded a five-year contract to provide ground systems and mission operations support to NASA facilities. In line with NASA’s missions, such as the recently launched JWST and Geostationary Operational Environmental Satellites, KBR Wyle will develop and execute systems, supervise the facilities’ flight operations, and conduct studies for improvement.

What They Do: A world-renowned aerospace and defense company, Aerojet Rocketdyne develops space propulsion and energetics, missile defense, strategic, tactical missile, and armaments. The California-based company also lends its strategic and tactical missile programs to the federal government to bolster its defenses.

The government contracted Aerojet Rocketdyne to lead the development of the critical engine of the Orion spacecraft. With their expertise in designing and engineering space propulsion tech, they will help NASA integrate the Orion Main Engine (OME) into the said spacecraft. The Orion spacecraft will be used in the space agency’s Artemis missions.

Furthermore, the California-based NASA contractor will be in charge of the OEM design certification and special studies of its performance. And according to NASA, the OEMs Aerojet Rocketdyne produced will be used in other NASA missions.

What They Do: The Science Applications International Corporation is one of the leading drivers of innovation in the intelligence and information technology industries. A Fortune 500® company, SAICS specializes in delivering advanced IT modernization, engineering, and mission solutions to a wide array of industries.

In 2017, SAIC won a five-year contract from NASA, where they were tasked to lend their high-end engineering support services at Goddard Space Flight Center in Maryland.

What They Do: Established in 2017, Peraton is a private-owned tech company that delivers cutting-edge space, cyber, communications, homeland security, and defense intelligence services to clients across the globe.

The Virginia-based tech contracting giant will use its space industry expertise to deliver Near-Earth mission support to NASA. Under the SENSE Contract, Peraton will provide tracking, command, and telemetry support for NASA’s near-earth missions.

To view more information about these NASA contractors and their active contracts, visit SAM.gov, formerly known as the Federal Procurement Data System (FPDS).