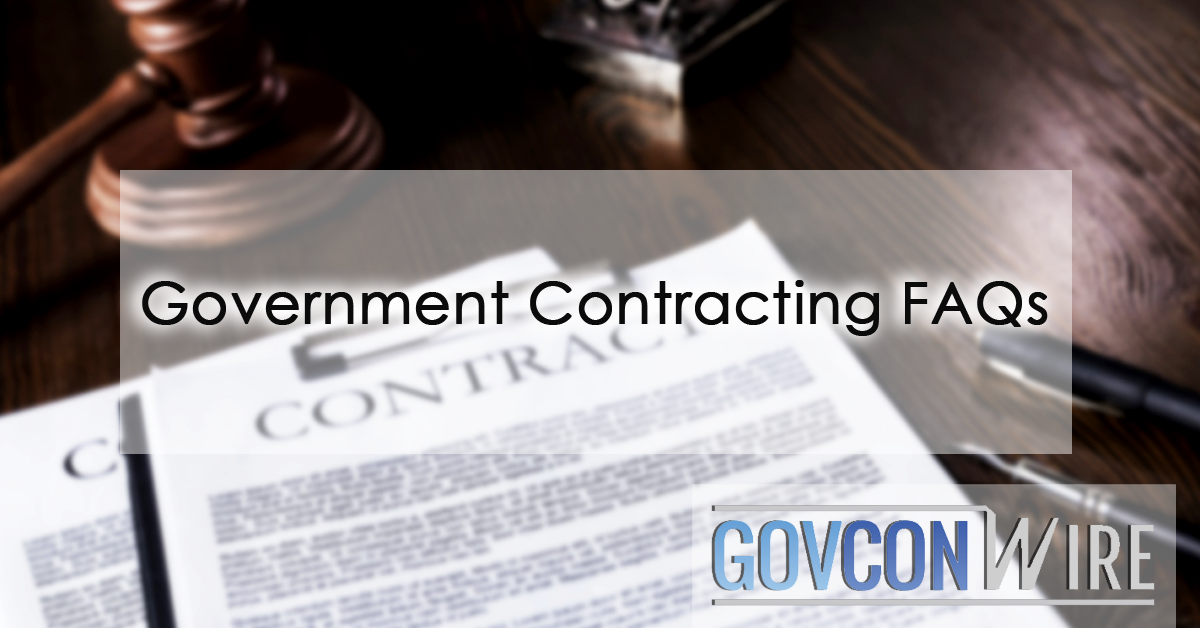 All your common and frequently asked questions about government contracting are answered below:

What is considered government contracting?

Individuals or firms who enter into a contract with any government department or agency to perform a specified task, provide labor and materials, or sell goods and services are known as federal contractors. A federal subcontractor is a business that works with another business that has direct government contracts.

Both federal contractors and subcontractors take on certain responsibilities while doing business with the federal government. Discrimination based on sex, race, color, national origin, religion, disability, or veteran status is prohibited under the law. Affirmative action is required when hiring people from historically discriminated-against groups or minority-owned enterprises.

Why is government contracting important?

The federal government needs to acquire products and services in order to keep all public and essential services such as those required for public safety, national security, health, infrastructure and social services.

What are the principles of government contracting?

The principle of transparency ensures that state entities contract through a public selection process that includes objective, transparent, fair, and complete rules that allow bidders to submit appropriate proposals as well as file objections, observations, questions, and/or clarifications to the contracting entity’s documents.

State agencies must hold public hearings in order to comply with the above, where proponents can express their concerns and submit questions, clarifications, and/or complaints.

Third-party documents and applications are also made public to ensure that the processes are carried out in a fair and equitable manner.

According to the economic principle, selection procedures should be arranged so that only the procedures that are strictly necessary and have connected terms and preclusive and urgent deadlines are used, guaranteeing that the least amount of resources are used.

Before beginning the selection process, the awarding agency must ensure that it has the appropriate financial allocations and preliminary research in place to determine the contract’s aim.

Contractors, governmental agencies, and public officials are all held accountable for their actions throughout the selection process under the responsibility principle.

When their acts and/or omissions create damages to a proponent and/or contractor, they are accountable for civil, criminal, and disciplinary penalties. ​

In government contracting, a framework of accountability must be developed. As a result, when required by circumstances, both public officials directly or indirectly involved in the procurement process and the administration of procurement contracts, as well as private companies dealing with the government, are investigated and held accountable for their activities.

In this regard, it is the responsibility of the heads of procuring bodies to establish and maintain a transparent, effective, and efficient procurement system in their respective agencies. Each official participating in the procurement process must have clear and legally defined responsibilities.

Is government contracting worth it?

Pros of Being a Government Contractor

You will be properly compensated if you do business with the government. The government wants things done right the first time, therefore they’re willing to pay more for high-quality labor.

Contractors are significantly more likely to be paid more than full-time government employees who perform equivalent tasks. Benefits are the only thing the government does not grant to contractors.

Winning a government contract builds up a good reputation for a business. Whenever a brand successfully bid on any government contract and gets good reviews and feedback from the government agencies, they are more likely to get referred and contracted for more contracting opportunities in the future.

It may be difficult to become a government contractor, but once chosen, companies are frequently hired for long periods of time. The majority of the government’s planned service contracts require contractors to work for a minimum of one to three years. If a contract company performs well during its initial contract time, the government will frequently return to them with additional work to accomplish.

Cons of Being a Government Contractor

It requires a lot of paperwork to apply to work as a federal contractor. To operate with the government, businesses must have certain credentials and codes.

Companies must also comply with the Code of Federal Regulations and a variety of other labor laws. It will be reported if the job is not done correctly or according to the stated rules. That documentation is then made public and accessible at any time.

Businesses must also keep track of their documentation. The government can request an audit of any of its contracted enterprises at any time.

While partnering with a federal contractor can result in a long-term contract for some companies, the industry remains unpredictable. The government can decide to stop cooperating with a certain corporation at any time, without warning.

The government has a reputation for being a slow payer. Although contracted companies are generously compensated, the government can take up to sixty days to pay for finished services. Government-contracting companies frequently use government invoice factoring to provide a consistent cash flow while on the job — operational costs must be met, and payroll must be made.

What are the five major categories of government contracting?

The pricing of this group of government contracts will not change. However, there are times when a ceiling price, target price, or even both are used. It’s also worth noting that with fixed-price contracts, the risk is transferred to the contract. This is due to the fact that these government contracts are not based on the amount of time or resources spent. You’re basically working with what they put in front of you.

This one is quite straightforward. For these contracts, the government establishes a per-hour labor rate, assesses materials costs, and establishes a price ceiling. If you can provide the services within the budget, this is a fantastic option.

Contracts for emergency services, for example, are frequently quite short-term. The contractor will only deliver labor and not materials in some situations, known as labor-hour contracts.

While fixed-price contracts place greater risk on the contractors, cost-reimbursement arrangements place more risk on the government agency. These government contracts are more likely to be for research and development than for actual goods or services.

Cost-reimbursement contracts are divided into numerous subcategories, including cost/cost-sharing, cost-plus-fixed-fee, cost-plus award fee, and cost-plus incentive fee contracts. Some of these have a minimum and maximum payment range, while others are more flexible.

An incentive contract will be based upon either a cost-reimbursement contract or a fixed-price contract with added incentives.

A cost-reimbursement contract or a fixed-price contract with additional incentives will be used to create an incentive contract.

Because the government is well aware of the potential for traffic disruption, they may award an incentive contract to a business that can complete the project speedily.

If the company completes this project ahead of schedule, it may be eligible for a bonus or incentive if the contract is completed on time or early.

A government agency may not always know exactly what they require. For example, they may not be aware of the exact quantities of material they require or the length of time they require a contractor to offer a service.