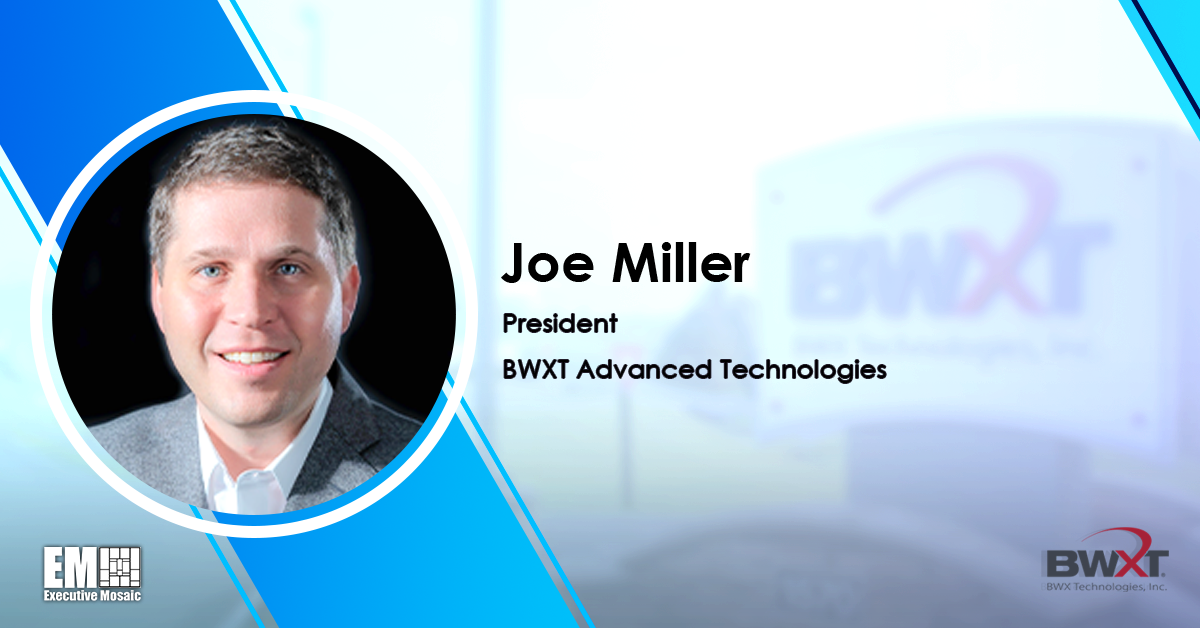 Joe Miller began his career serving in the U.S. Navy on a fast-attack submarine where he was first educated about the fundamentals of nuclear power. After finishing his time in the Navy, the former serviceman worked at a shipyard building submarines and quickly became interested in high-technology industries.

Miller joined nuclear component and fuel producer BWX Technologies in 2011. He has played a key role in a number of company initiatives, including the thermal hydraulic test program for nuclear reactor development, as well as program and operations management in the Advanced Technologies business unit, where he is now president.

Miller spoke with GovCon Wire about BWXT’s efforts to deliver microreactors to the U.S. government, their recent acquisitions (particularly highlighting businesses in Canada), as well as the way the organization has used artificial intelligence and machine learning to efficiently accomplish its objectives, among other topics.

What can you tell us about the company’s recent growth initiatives and how you’re driving value for your customers through contract awards, acquisitions and other aspects across the federal sector?

The BWXT Advanced Technologies team was recently awarded a competitively bid $300 million contract by the U.S. government to build the first Generation IV microreactor to be manufactured in the United States. We will go through all the final safety reviews, integration and assembly and early commissioning tests over the next several years and we’ll deliver that microreactor to Idaho National Laboratory for a full suite of tests. That product is designed for use by the U.S. Department of Defense to provide power to remote locations and for disaster response. We’re also developing a microreactor design for commercial use.

With regard to space, we have three contracts with NASA supporting nuclear propulsion for a crewed spaceflight to Mars and the creation of a power system that will generate power on the surface of the Moon.

On the M&A side of things, BWXT has commercial operations headquartered in Canada, and there have been several acquisitions in that segment of our business, including one that gave us the ability to manufacture fuel for the CANDU reactors. We have had a few other acquisitions in that business to strengthen our capabilities to service and refit Canadian reactors and prepare to manufacture small modular reactors, an emerging type of nuclear reactor. These acquisitions led to BWXT being selected to assist with early design work on a small modular reactor that GE Hitachi is planning to deploy to customers globally.

We also acquired a nuclear medicine business in Canada and are using that business to continue to produce products for the medical industry and commercialize a new technology used to generate the world’s most-used medical isotope. Technetium-99 is used in diagnostics for the medical industry, with millions of doses a year. Our technology can produce it in a way that reduces radioactive waste streams and eliminates nuclear proliferation concerns.

Earlier this year, BWXT acquired Dynamic Controls Limited in the U.K. and Los Angeles-based Cunico. Both companies manufacture components and fittings for the U.S. and U.K. submarine enterprises and greatly complement our existing core business.

Whenever we expand as a company, we stay close to our core capabilities in naval nuclear propulsion and high-consequence power generation. The expansion we are seeing now is into microreactors, the medical radiopharmaceutical business and in other ancillary products for submarines in the U.S. and the U.K.

What are your strategic goals for the coming year? What do you hope to accomplish and any new markets that you’re keeping an eye on in the federal sector?

Advanced microreactors have not been demonstrated in the U.S., so executing that program and delivering the reactor in the next several years is of the utmost importance, along with prospects for expanding the use cases for that technology within the government and commercial markets.

As far as new business lines, if it is nuclear and requires high-power-dense systems, we will focus on it. I see a lot of emergent growth, particularly in space applications. We’re keeping a close eye on how BWXT can enable space exploration and infrastructure development on the Moon and beyond.

With artificial intelligence and machine learning impacting most industries and the U.S. military dramatically as we move forward, what has impressed you the most about the technology’s capabilities to improve decision making across the federal sector and all areas? In addition, how can AI be used to address some of the biggest challenges you see in your industry?

AI and machine learning are tremendous time-savers. In an early design, the number of iterations engineers go through to find a good window of opportunity for a reactor design takes a lot of time. We have developed capabilities using AI to rapidly move through those iterations using a large number of input variables that yield windows of opportunity for our designers to then work through detailed investigations and outcomes that essentially result in optimized designs.

We chop off the timeline significantly using AI on the design aspect. Then you go through the nuts and bolts of engineering, which has stayed the same and probably will not change in the near future.

For example, with machine learning, especially when we set up the camera systems and optical interfaces with each one of our machines, we can analyze that data quickly, help troubleshoot the processes and optimize rapidly. Those are the longest lead items. They are in the front end of the early design iteration and the back end in developing the build. We have used AI and machine learning in both aspects to make progress much faster than we could before.

Two separate teams led by BWX Technologies (NYSE: BWXT) and X-energy have won contract options to finalize portable microreactor designs as part of a prototype competition managed by the Department of Defense’s Strategic Capabilities Office. BWXT and X-energy will move forward from preliminary design work under Project Pele and conduct independent development efforts in the next

President Donald Trump has signed an executive order directing the federal government to launch an initiative to drive the adoption of small modular nuclear reactor technology across national defense and space missions. The EO is aimed at revitalizing the country’s nuclear energy sector and space exploration initiatives while developing alternative energy options to support defense