The first award is valued at $890 million and covers the service’s T-AO 211 and 212 oilers and the second contract modification is worth approximately $535 million in support of the construction of the Expeditionary Sea Base 8 ship, the Department of Defense said Thursday.

Work on the oilers will be performed in California, Michigan, Virginia, Wisconsin, Pennsylvania, Massachusetts and Mexico through June 2027.

The modification includes an option for T-AO 213 oiler design and construction that could bring the contract’s total value to $1.6 billion if exercised.

Work on ESB 8 will be carried out in California, Virginia, Texas, Pennsylvania, Mexico and Turkey through March 2026. 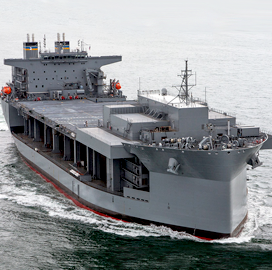 A General Dynamics (NYSE: GD) NASSCO subsidiary has secured a potential $1.63B contract modification to build and design the sixth and seventh Expeditionary Sea Base ships for the U.S. Navy.