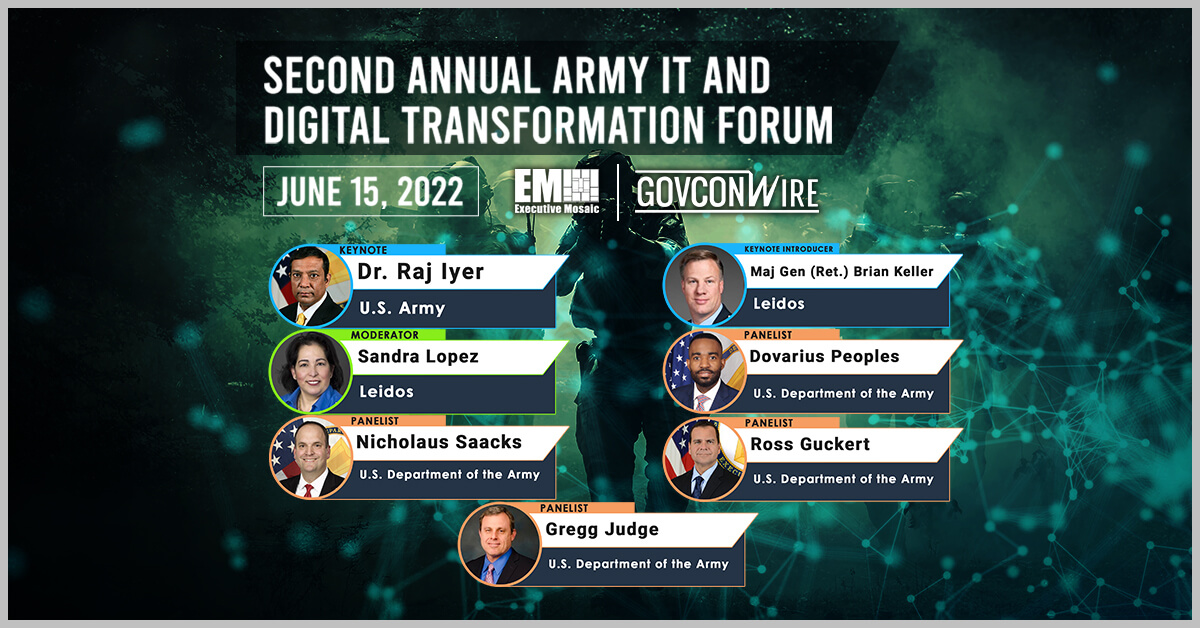 Army CIO Raj Iyer, a 2022 Wash100 Award recipient, opened Wednesday’s Second Annual Army IT and Digital Transformation Forum, with an engaging and informative keynote address covering the challenges in talent recruitment and the immediate need for digital transformation efforts to drive the Army toward its 2030 modernization and strategic objectives.

Following the opening keynote, the forum and conversation continued with GovCon Wire Events presenting a full expert panel featuring a breakdown of the business requirements and changes that the U.S. Army continues to adapt to as well as the management of resources and funds to initiate the modernization efforts that the service branch is undergoing heading into FY24.

The panel moderator Sandra Lopez, CTO for the Enterprise IT & Cyber Solutions (E&CS) organization within Leidos Defense, opened the discussion introducing all three panelists to the Forum to talk about the biggest challenges in avoiding obsolescence across the U.S. Army and the greatest organizational cultural impediments to its overwhelming modernization efforts.

Peoples also discussed the misunderstandings that can occur from a customer to service and delivery standpoint, which may be considered as an afterthought in the process and culture of delivering solutions for the Army.

“Culturally, I believe there are several aspects to identify, especially as we operate without direct funds from the Army itself,” Peoples explained. “As you think about corporate America, the Army isn’t built as a free for a service organization, we still receive reimbursable funds. There are a lot of different colors of money and we need to ensure we have the right color to move our mission critical capabilities forward as we move into the future.”

As the panel discussion turned to Gregg Judge, deputy director Enterprise Cloud Management Agency [ECMA] as well as U.S. Army CIO with the U.S. Department of the Army, he touched on the point of having “the right color of money” from Dovarius Peoples’ earlier comments.

Judge mentioned that he anticipates significant exponential growth for the U.S. Army as Google and other platforms like ServiceNow or Salesforce developing new capabilities and working with the service branch. He noted that the Army is receiving a much higher need for demand signals and other offerings like software-as-a-service.

“That’s really important for the Army right now because as-a-service provides us with a massive advantage versus the traditional legacy of licensing models,” Gregg Judge emphasized. “We are now only paying for what the Army actually uses, not necessarily what we might want.”

Judge continued, “Our leaders have literally an unprecedented view of the resources that are actually being consumed by their organization. That utility model is already really starting to speak volumes for the Army and the sector as a whole.”

Most notably, Maier advocated that the united network operations aspect was a larger part of the construct in the Army, which needs to be explored. He specified that the ultimate goal is to align those network operations along with the set of requirements, resourcing and acquisitions strategies to kick off a greater modernization effort in the years to come, starting in FY24.

“We already have a number of requirements and definition packages going through the system for approval,” Matthew Maier explained. “We’re laser focused on six different key areas for unified network operations to include the lower tier, the upper tier, the data fabric as well as the strategic and enterprise focus of the network.

On the acquisition front, The Army has a number of mid-tier acquisition efforts ongoing and will explore any and all opportunities for industry competition in that space,” he concluded.

If you’re interested to learn more about the Environmental Systems Research Institute’s more than 50 years of history in creating cutting-edge GIS and Geodesign technologies, be sure to attend GovCon Wire’s next event, “The Contributions of Geospatial Science and Technology to Climate Change” on June 22.

Dr. Lorraine Tighe, director of Earth Sciences Solutions at Esri, will be featured as our fireside guest to discuss how Esri continues to evolve their mission to help organizations gain guidance, insight, and information from geospatial data to ensure a more sustainable Earth.

Army CIO Raj Iyer, a 2022 Wash100 Award recipient, opened Wednesday’s Second Annual Army IT and Digital Transformation Forum, with an engaging and informative keynote address covering the challenges in talent recruitment and the immediate need for digital transformation efforts to drive the Army toward its 2030 modernization and strategic objectives. Following the opening keynote, the forum and
Sponsor