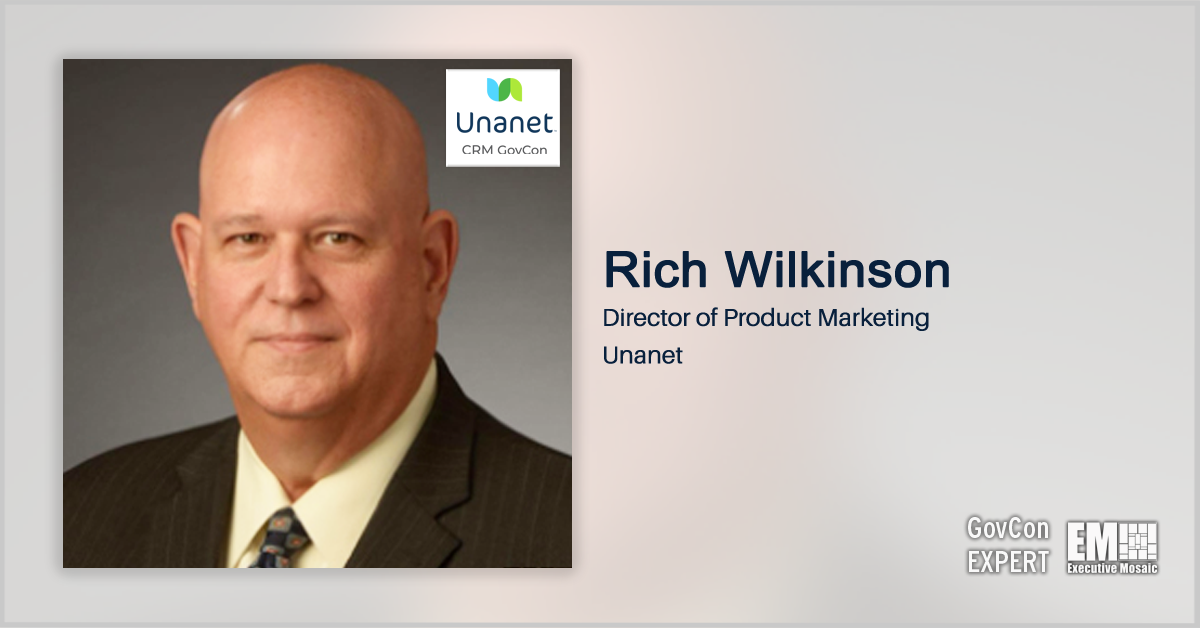 Rich Wilkinson, director of product marketing for Unanet and a GovCon Expert, has published the first of a two-part article to shed a light on six sources of pressure that GovCon Expert Rich Wilkinson expects will shape the GovCon business and impact company strategy in the year ahead — and likely beyond.

The first three of the six pressure sources are highlighted here in Part 1. The next GovCon Expert article will provide further detail in Part 2, which we will post to this site in the coming days.

Government contracting firms on the whole are carrying an optimistic outlook into 2022, with more than 70% of GovCon execs who were surveyed for the 2021 GAUGE Report characterizing their view of the current business environment as either “cautiously optimistic” or “very optimistic. But that generally rosy outlook is tempered to some extent by a distinct set of industry pressures, some familiar and some generating a new sense of urgency.”

You can read Rich Wilkinson’s latest GovCon Expert article below:

Government contracting firms on the whole are carrying an optimistic outlook into 2022, with more than 70% of GovCon execs who were surveyed for the 2021 GAUGE Report characterizing their view of the current business environment as either “cautiously optimistic” or “very optimistic.”

But that generally rosy outlook is tempered to some extent by a distinct set of industry pressures, some familiar and some generating a new sense of urgency. Here are three that we expect will be top of mind for government contracting businesses in the New Year:

Four years ago, budget and funding constraints were identified as a significant concern by more than 50% of all GAUGE Report respondents. Next on their list of biggest concerns was finding qualified talent, identified by 30% of respondents, followed by the cost of compliance, named by about 15%. Meanwhile, Integration of accounting and project management tools barely registered, with only about 2% of respondents naming it as a concern.

The following year, in the 2019 GAUGE Report, the number of firms identifying tools, recruiting and cost of compliance as concerns rose significantly and in parallel, while only about 30% of respondents indicated concerns about funding constraints. It should be noted that 2019 was not an election year, and historically, funding seems to be of less concern when there’s no Federal election cycle in process.

Fast-forward to the 2021 GAUGE Report, where we see the issues of funding, recruiting and compliance again tightly clustered, with each identified as a concern by about 50% of respondents. Meanwhile, integration of accounting and project management tools climbed the list of GovCon issues, with more than 30% identifying it as a concern, an all-time high for the GAUGE Report. What’s more, we saw funding constraints register as a concern for more than 50% of respondents, which on first glance could be seen as surprisingly high for a non-election year, but wasn’t entirely unexpected amid the extreme business uncertainty of a pandemic.

We discussed these results with a group of large and mid-sized GovCon firms for their perspective, and they told us in no uncertain terms that the issues of funding uncertainty, cost of compliance and recruiting remain top-of-mind for many GovCon firms. Indeed, concern about these three issues appears to have escalated since we conducted our survey for the 2021 GAUGE Report early in the year.

Many of those firms spoke of both the “work from anywhere” trend and the dramatically increased mobility of the workforce as contributors to their concerns about recruiting. Several members remarked that the remote work trend and increased workforce mobility may simply be two sides of the same coin. Several mentioned the “Great Resignation” phenomena as a highly disruptive factor that perhaps is feeding the remote work trend or at least running in parallel with it.

The factors fueling concern about the cost of compliance were less clear, but both vaccine mandates (and the concomitant tracking requirements) and cyber security initiatives figured heavily in the discussion. As with funding concerns, the primary contributor to the concern about compliance cost seems to be the uncertainty associated with current initiatives rather than any single, concrete federal action, policy or initiative.

PREDICTION: HR tools will begin to bubble to the top of the application stack as companies prioritize addressing remote work and vax mandate initiatives and issues.

In the annual GAUGE survey, we ask government contractors a classic question: “What issues keep you up at night?” When we posed that question in 2021, the responses revealed heightened concern about increasing competition for contracts. In fact, the issue was identified as either the number one or number two concern by almost 50% of respondents.

When we brought that specific finding to the firms in our discussion, what quickly became clear is that they see the issue of increasing competition for contracts as emblematic of all their other top business concerns. Both cost of compliance and difficulties in talent recruiting and retention directly impact a company’s ability to compete for new work (or re-win existing work).

When the discussion turned to the issue of funding uncertainty, our discussions revealed that the uncertainty surrounding existing programs and customers has caused firms to try to move into adjacent markets (different customers or even different agencies), which dialed up the competitive pressure. Increased costs, new and less familiar customers, and workforce turnover were all identified as competitive issues that were keeping C-Suite executives up at night.

PREDICTION: Embracing market intelligence tools and a better capture process, then integrating them with other systems, will be a positive step in addressing, at least partially, these competition concerns.

This is not a new issue, but it is likely that the framers of the Department of Defense Business Systems Rule back in 2011 never anticipated that adequate/approved/accepted systems would become a major driver in the evaluation criteria for competitive solicitations. Yet a decade later, that’s exactly where we are.

To recap briefly, the Business Systems Rule identifies and establishes adequacy criteria for six business systems: accounting, estimating, material management (accounting), purchasing, earned value management and government property management. Of those, small and mid-sized GovCon firms, especially those in the professional services domain, could reasonably be expected to utilize three: accounting, estimating and purchasing. And even there, purchasing is a stretch. Of those three, only accounting has an adequacy requirement rooted in the FAR (Federal Acquisition Regulation) and even then, only for cost-reimbursable contracts. The dollar volume criteria for the government to even review estimating and purchasing systems is so high that it’s nearly impossible for a small business to breach the threshold. For purchasing, the threshold is $50 million annually in contracts with a significant purchasing requirement. For estimating, it’s $50 million in contracts requiring submission of certified cost and pricing data. Reaching those thresholds would be difficult even for most midsize firms.

And yet a requirement to demonstrate review and acceptance by the government of all three of those systems (and sometimes, even, earned value) is appearing with great regularity in competitive solicitations. Sometimes it’s a gate (especially for accounting systems), but more often points are offered in the source selection evaluation scheme for each accepted system. This can mean that offerors without compliant systems might be excluded from the competitive range when it comes time for negotiations and best-and-final offers.

In the 2021 GAUGE Report, accounting system audits (used to assess adequacy and often a prerequisite for a contracting officer’s determination) were identified as the most common audit experienced in the prior year by more than one-third of respondents. No other audit, not even the dreaded incurred cost audit, showed a higher frequency.

Our discussions reinforced this concern. The firms we talked to expressed frustration with the inability to get the government to review systems below its somewhat arbitrary thresholds, even though compliant systems are expressed as an agency requirement in solicitations set aside for small businesses. Again, small businesses will almost never meet the thresholds for purchasing or estimating system review. Nor are they likely to ever meet the requirement for an earned value system review. The government actually prohibits use of earned value on anything other than cost-type R&D contracts and on contracts less than $25 million.

Some firms pointed out that the trend toward government acceptance of system reviews by independent auditors (such as CPA firms) has improved the ability of small firms to demonstrate adequacy of their accounting system. They also noted, however, that this trend generally does not apply to other systems. Some said they had success using independent review results to “claim points” in evaluation schemes, but complained that the same approach did not work when formal system acceptance was a “gate.”

PREDICTION: If any of the actions currently before the Court of Federal Claims are successful, these potential rulings could pave the way for alternatives to formal government approval of other business systems. This represents opportunity primarily for CPAs and EVM consulting firms.

By themselves, the three forces detailed here would be enough to keep government contracting businesses busy in 2022. But as we will detail in the second part of this article, there’s more to the story — three additional pressure points for GovCons to confront in the year to come. Check back soon to find out what those are and how they’re likely to play out, in Part 2 of our look ahead at what 2022 holds for the government contracting sector.

Rich Wilkinson is a GovCon Industry Director at Unanet and is an expert in government contracting, specializing in compliance.  He has spent the last 25 years in executive roles with prominent GovCon accounting software companies. Prior to that he was a controller for Washington DC area government contractors and before that, he served as a contracting officer with the Naval Air Systems Command.