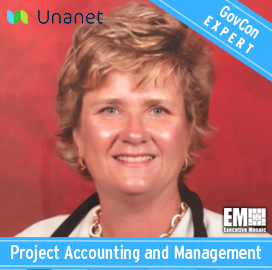 Kim Koster, vice president of GovCon Strategy at Unanet, co-author of the 2021 GAUGE Report and GovCon Expert, has published her latest article on Thursday as a member of Executive Mosaic’s GovCon Expert program.

Koster provides insight into the Gauge Report’s findings that explore the best practices and benchmarks of the government contracting (GovCon) world each year. This year’s report has a focus on data that government contractors should use to write proposals that win more business.

The 2021 report gathered its data from a pool of nearly 1,500 government officials that provided a variety of perspectives, highlighting the significant impact that COVID-19 pandemic has had on the GovCon sector in 2020. You can read the full 2021 Gauge Report, written by Kim Koster of Unanet and Christine Williamson, partner of CohnReznick, right here.

You can read Kim Koster’s latest GovCon Expert article below:

The 2021 report illuminates the benchmarks, best practices and tech trends that are providing government contractors with a path forward in a time with more than its share of uncertainty.

Even for organizations accustomed to the high-pressure world of government contracting, 2021 has provided a considerable number of stressors, more than a little adversity and some decidedly unexpected twists.

The stressful developments brought on by a global pandemic (quarantine, remote work, supply chain disruption, contractual uncertainty and at a macro level, high unemployment, and the potential for a recession) are one set of factors.

The more familiar competitive challenges like growing profits, dealing with tech disruptors, and navigating a high level of regulatory and policy uncertainty are another set. Add other novel stressors such as the government’s demand for cyber-security compliance and the fear of an imminent hack, and the result is an unprecedented pressure cooker environment for government contractors.

Just released, the fifth edition of the annual GAUGE Report draws its findings from a survey of more than 1,400 contributors representing a wide range of company sizes, types, and industries across all of government contracting.

The survey data yields several compelling storylines, some surprising performance metrics and more than a few innovative business practices shaping what is undoubtedly a volatile government contracting landscape. Amid so much flux, one thing is certain: There is much to gain by benchmarking your organization against competitors and by learning how other government contractors are confronting challenges and opportunities similar to yours.

Findings from the newly released 2021 GAUGE Report from Unanet and CohnReznick suggest government contractors are indeed feeling pressure from multiple directions — and many are finding creative ways to respond.

“2021 is rapidly differentiating between the firms with an organized repeatable approach to the new business pursuit,” observed report authors (of which, in the interest of full disclosure, I am one), and those with a one-off approach to each solicitation.” In this year’s survey, 75% of all respondents reported a win rate of less than 50 percent – the highest percentage since we have been doing the GAUGE survey.

The authors went on to say, “The drop in win rates might very well be a reflection of the current pandemic-influenced business environment, but the fix will probably be found in a structured approach to Business Development in general and pursuit processes in particular.”

Here’s a glimpse of some of the key findings from the 2021 GAUGE Report, including a revealing before and after look at how the pandemic has shifted organizational mindset:

Just when we thought we could see where this whole Covid-19 thing was going, the emergence of variants has, once again, clouded the outlook. Kim Koster observed, “Nothing within memory has changed the landscape of GovCon and taken everything from our processes to our workplaces in unexpected directions like Covid-19.”

Earlier in the year, the numbers had been significantly higher. This year, the respondents who said they were either very optimistic or cautiously optimistic was just over 70 percent and those with a neutral outlook remained at just over 20 percent (71 and 21 percent).

It would appear that the outlook in the later months of 2020 and the current perspective simply aren’t materially different. The current trends associated with the emerging Covid variants do not portend well for the coming year, either.

Nonetheless, the share of government contractors expressing a pessimistic outlook has dropped steadily each year from almost 20 percent three years ago to just 8 percent in 2021.

“Even with all the changes arising out of the pandemic, the uncertain business environment and, in particular, the vagaries of contract funding during a change of administration, GovCon is still a very stable market,” the report authors write.

Understandably, contractors with greater than $50M in annual revenue had a slightly more favorable outlook, probably because of greater cash reserves and more diversity in their contract portfolios.

Last year, the cost of compliance topped the respondents’ list of pressing concerns, with 30% of respondents identifying it as their most pressing concern. For 2021, it was overshadowed by budget and funding constraints with 54 percent identifying that as their number one concern. Last year’s data showed the share of organizations naming fiscal constraints as a top concern having decreased by nearly half since 2018, but it’s back on top now. Certainly, the pandemic has contributed to that, but funding uncertainty is always a matter of concern during a year in which we transition from one Presidential administration to another.

Cost of Compliance still came in at number two on the list followed closely by the perpetual concern, a lack of qualified talent. But they are neck and neck with neither significantly greater than the other.

What issues keep organizational leaders up at night? Operational efficiency topped the list last year, but this year the increasing competition for work rose to number one by a rather large margin. Almost half of all respondents identified that as either their number one or number two concern, compared with just 31 percent for operational efficiency.

In fact, resource recruiting took the number two spot by a small margin, coming in at 33 percent. All of those issues bear further watching as the Covid pandemic persists and the government contracting sector begins to adjust to the next normal, whatever that may ultimately look like.

In keeping with the concern about increasing competition, we asked respondents to tell us about their challenges in preparing proposals. Here, communication topped the list with 83 percent of respondents saying that “too little communication with the Customer or Contracting Officer” was somewhat of a challenge or a significant challenge.

“Unrealistic timelines from the opportunity to proposal due date” came in at a close second with more than three-quarters of respondents (76 percent) describing that as somewhat of a challenge or a significant challenge.

This year, we asked survey respondents about their proposal volume. Writing proposals can be one of the most resource-intensive indirect activities (and one of the most expensive). The answers were not all that surprising, but the volumes were higher than we might have guessed.

On average, our respondents told us that they write 23 proposals per year for major procurements (large contracts, or MAC or GWAC vehicles). In addition, they write another 20 for task orders under the vehicles they already have.

And, highlighting an activity most of us forget about, they write another 19 proposals to price out major modifications to the scope of existing contracts. While mod proposals might not require the technical proposal effort of new competition, the pricing proposal and negotiation can be every bit as intense as a new contract.

This topic of competition, proposals, and winning rose to such prominence in this year’s responses that we have included a short guide to Creating a Winning Proposal drawing not only from the GAUGE survey but from our own years of experience in the discipline.

One last note on proposals. We always ask what audits our respondents have experience in the last year. The incurred cost submission is the perennial number one, but this year, numbers two, three, and four were all business system or proposal related. We are seeing more and more solicitations with provisions requiring documentary evidence of accounting system adequacy as a “gate” before firms can participate in a competition.

This is certainly reflected in the number two and three most frequent audits identified by the survey: Accounting Systems audits and Pre-Award Surveys. And, of course, audits of the proposals themselves came in a number four.

Finally, win rates are always the subject of some of the survey questions. This year, 75 percent of all respondents reported a win rate of 50 percent or less. It is clear that writing more proposals is not necessarily producing more wins.

It is equally apparent that our respondents recognize the issues that their own win rates reveal, and it is reflected to their responses to our question about which business development challenges they plan to address this year.

The top three responses were (1) being smarter about targeting their pursuits, (2) looking earlier for partners to team with, and (3) pushing more resources to their BD and capture teams.

We also saw a substantial number of firms reporting adoption of a formalized capture or gate process for their pursuits, though the number is still just over half (55%). We discuss the concept of structured pursuit in this year’s GAUGE Report.

A GAUGE report wouldn’t be complete without a mention of cash. The challenging business environment notwithstanding, this year’s respondents appear to be leveraging their systems to collect payments more effectively from their customers. 40 percent of all respondents reported a Days Sales Outstanding (DSO) metric of 30 days or less. This is far and away the most firms ever reporting a DSO that low.

If government contractors are to take away one message from the 2021 GAUGE Report, it is that their success going forward in such a pressurized business environment depends on “selecting better opportunities to pursue and then leveraging both technology and expertise to structure their pursuit processes for success.”

At the pinnacle of his career at the University of Alabama, Coach Bear Bryant is quoted as saying that “Winning isn’t the most important thing – it’s the ONLY thing.”