Executive Mosaic is pleased to introduce Gwynne Shotwell, president and chief operating officer of SpaceX, as a recipient of the 2021 Wash100 Award for the fourth time in the eight-year history of the Wash100 Award, the industry standard for excellence in the government contracting (GovCon) sector.

This marks Shotwell’s fourth Wash100 win in the last five years. Previously, Shotwell was recognized as a 2019 Wash100 Awardee for driving innovation and the development of the latest groundbreaking space technology.

As the president and COO of SpaceX, Shotwell manages the company’s daily operations. She’s also a member of the SpaceX Board of Directors. She joined SpaceX as the vice president of Business Development and built the Falcon vehicle family manifest to more than 100 launches, which has generated more than $10 billion in business for the company.

Most notably, Shotwell helped lead SpaceX’s launch of the manned Crew Dragon capsule to the International Space Station (ISS) as part of the Demo-2 mission for NASA’s Commercial Crew Program.

Demo-2 reached the ISS in late May 2020 carrying NASA astronauts Robert Behnken and Douglas Hurley along with experiments and cargo. The spacecraft, nicknamed “Endeavour”, returned to Earth through a splashdown landing in the Gulf of Mexico in August.

“We could not be more proud to see Bob and Doug safely back home—we all appreciate their dedication to this mission and helping us start the journey towards carrying people regularly to low Earth orbit and on to the Moon and Mars,” said Shotwell at a news conference following Demo-2’s return.

In the same month, SpaceX secured $1.9 billion during a funding round which could increase the company’s equity value to $46 billion, according to Bloomberg. Earlier in 2020, SpaceX announced plans to spin out its Starlink broadband services business as a public company.

SpaceX has sent over 240 satellites for the Starlink constellation in low-Earth orbit to support high-speed internet connection, Shotwell told attendees at a JPMorgan Chase & Co. event.

“This is going to turn SpaceX into a company that is providing service to consumers, which we are excited about,” she said.

In an October discussion with Microsoft, Shotwell discussed SpaceX’s work with the former to connect Starlink services with the Azure cloud environment. The partnership will enable access to Starlink from areas without fiber-based connectivity, said Shotwell.

SpaceX sent another Crew Dragon vehicle dubbed “Resilience” to the ISS along with four astronauts for the Crew-1 mission in November. The mission, which serves as the first operational flight for SpaceX, will be followed by five crewed flights under the company’s partnership with NASA.

SpaceX also secured contracts with NASA to provide launch services and delivery payloads meant to provide insight into the complexities of space. In March, the company landed a spot on a potential $7 billion award to deliver supplies and experiments to NASA’s habitable lunar Gateway envisioned to support missions to the moon.

The company will perform cargo delivery services under the Gateway Logistics Services contract for 15 years. NASA also tapped SpaceX to launch scientific studies to the “Psyche” sun-orbiting asteroid located between Mars and Jupiter as part of a $117 million contract.

SpaceX’s Falcon Heavy rocket will additionally send secondary payloads including the Escape and Plasma Acceleration and Dynamics Explorers experiment on the Mars atmosphere, and the Janus study on binary asteroids.

The company’s Falcon 9 launch vehicle has also been tasked to send NASA’s Interstellar Mapping and Acceleration Probe to support heliophysics research under a $109.4 million award. Other missions that require launch aboard Falcon 9 include the Plankton, Aerosol, Cloud, ocean Ecosystem oceanographic study, which comes as part of an $80.4 million contract.

In October, the company landed a $149.2 million contract from the Space Development Agency (SDA) to construct four tracking satellites with overhead persistent infrared (OPIR) imaging elements that will serve as part of the layered National Defense Space Architecture (NDSA) for missile defense and tactical communications.

In early 2021, SDA announced that it will retain SpaceX and L3Harris Technologies as contractors for the effort in response to bid protests.

Executive Mosaic congratulates SpaceX and Gwynne Shotwell on her 2021 Wash100 Award. Her vision to drive the future of space capabilities is leading to great things for her company and the future of human space exploration. 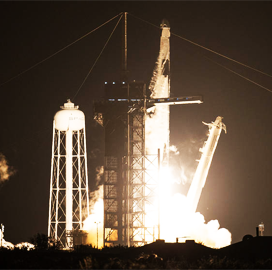 A SpaceX Falcon 9 rocket carrying four astronauts aboard spacecraft lifted off Sunday evening as part of the company's first operational mission to the International Space Station under a partnership with NASA, TechCrunch reported Monday.