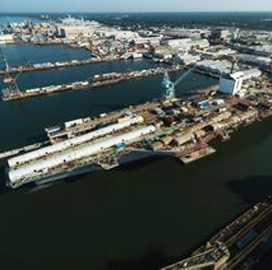 The branch decided to change the two-phase delivery approach initially planned for its JFK vessel to comply with a Fiscal 2020 National Defense Authorization Act provision aimed to ensure the ship can deploy and the F-35 aircraft before post-shakedown availability efforts are completed, the Department of Defense said Monday.

The Navy will obligate $14M at the time of award and expects the shipbuilder to complete the new process by June 30, 2024.

“We are pleased to have worked with the Navy to adopt lessons learned in the construction of USS Gerald R. Ford (CVN 78) to improve cost, production and planning efficiencies on Kennedy,” Lucas Hicks, Newport News’ vice president of new construction aircraft carrier programs, said in a statement released Monday.

A team of General Electric (NYSE: GE) and Ford (NYSE: G) has been awarded a Defense Production Act contract worth potentially $336M to produce ventilators for the Department of Health and Human Services.