Nand Mulchandani, chief technology officer at the Department of Defense’s Joint Artificial Intelligence Center, has been appointed director of JAIC on an interim basis.

JAIC said Tuesday Mulchandani assumed responsibilities from the retiring Lt. Gen. John “Jack” Shanahan, the first JAIC director and a 2020 Wash100 Award winner. Shanahan is set to retire from the U.S. Air Force in August after more than three decades in military service.

“As I walk out of the Pentagon for the final time, as the director of the JAIC, I am convinced more than ever that our future national security, economic security, and preservation of ideals embodied in the Constitution depend on embracing artificial intelligence across every element of the Department of Defense and society,” said Shanahan.

Mulchandani, who joined JAIC in 2019, brings to the role over 25 years of leadership experience in the security software and enterprise infrastructure industries.

He has held senior leadership positions at several tech companies, including Citrix (Nasdaq: CTXS), VMware (NYSE: VMW) and OpenDNS. He is a non-resident fellow at the Belfer Center for Science and International Affairs within Harvard University’s John F. Kennedy School of Government. 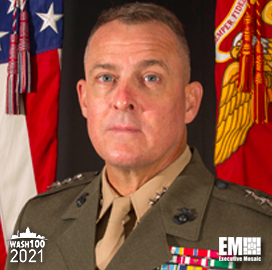 Executive Mosaic is excited to announce that Lt. Gen. Michael Groen, director of the Joint Artificial Intelligence Center (JAIC), has been selected as a recipient of the 2021 Wash100 Award for the first time in his more than 25 year career in the federal sector. Groen has earned his first Wash100 Award for leading JAIC