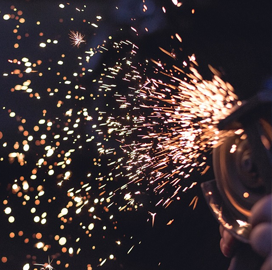 The Department of Defense has signed agreements worth $187M combined with five companies under the Defense Production Act Title III to help sustain domestic production capabilities and critical workforce during the COVID-19 pandemic.

Austal USA will maintain and expand domestic shipbuilding and maintenance capacity under a $50M agreement with the Pentagon.

GE Aviation received a $55M investment from DoD to sustain the production of engine components used on F-16 and U-2 aircraft and retain more than 225 jobs.

W International will help strengthen the shipbuilding industrial base and protect jobs under a $55M contract with the department.

American Woolen will help the Pentagon sustain the production of poly/wool blend fabric used in Army uniforms under a $2M contract.

In the U.S. Army’s modernization journey, the cloud is playing an increasingly important role. Army CIO Raj Iyer, a 2022 Wash100 Award winner, said that in the future fight, data will be the Army’s ammunition, and the cloud will serve as the next warfighting platform. Although the Department of Defense’s Joint Warfighting Cloud Capability program has seen
Sponsor