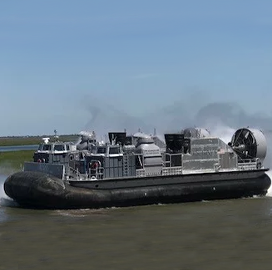 The company will build air cushion vehicle units 109 through 123 of the LCAS 100 class, which serves to be the Navy's Ship-to-Shore Connector platform, the Department of Defense said Thursday.

Eighty percent of work will occur in Louisiana and the rest will take place in Ohio, New Jersey and the U.K. DoD expects Textron to conclude work by January 2025.

According to the Pentagon, the current LCAC fleet is approaching the end of its service life and the next-generation platform has an estimated useful life of 30 years.

SSC systems are designed to ferry surface assault elements that can operate with mobile landing platforms and amphibious vessels.

Textron delivered the Navy's first SSC in February after completing a series of integrated tests on the platform's electrical, propulsion and steering components.