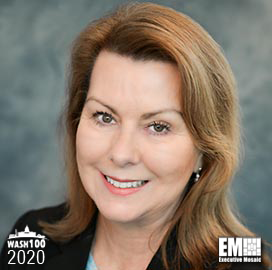 This marks the fifth Wash100 Award win for Singer. She won her fourth Wash100 Award in 2019 for her vision to improve the company’s position in artificial intelligence, big data and machine learning. Her role to advance AT&T’s technological capabilities has continued heading into 2020.

During her time with AT&T, Singer has led the efforts to double the size of the company’s national security portfolio. SInger leadership has led to great success for AT&T, including FirstNet, the nationwide public safety broadband network developed with the First Responder Network Authority, that supported more than 175 missions last year and has a five-year roadmap to expand.

Singer has served as the federal CIO emeritus for Tummler Singer Associates since Mar. 2013. She has volunteered on the Governing Board for the International Spy Museum since Sept. 2017 and has been a member of the Board of Trustees for the University of West Florida since Feb. 2018.

For the International Spy Museum, Singer expressed her excitement for the establishment that was opened in May 2019. The 140K-square-foot historical facility at 700 L’Enfant Plaza displays a range of methods and equipment used to obtain information to support human, signals and geospatial intelligence operations.

“All of that technology that you’re going to see here, combined with the human brain power, is what we will be bringing to bear as a nation on figuring out how to do about Iran, or any other country,” added Singer.

In order to advance AT&T’s capabilities in an ever evolving tech world, the company has worked extensively with the Department of Justice (DOJ) to help improve its mission performance with modernized technology.

Executive Mosaic congratulates Jill Singer and AT&T for her 2020 Wash100 Award selection. Her work to develop AT&T’s national security portfolio and advance tech modernization in the federal market have established Singer as a top executive in the government contracting sector.