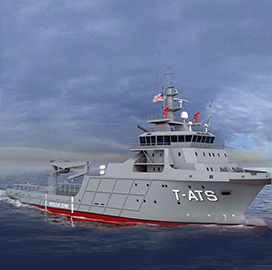 DoD expects the project to be finished by October 2022.

Gulf Island Shipyards initially won a $522.7M contract in March 2018 to design and construct up to eight T-ATS vessels based on commercial towing offshore models.

The shipbuilder laid the keel on USNS Navajo, the lead ship of its class, during a ceremony held in late October 2019 at the Houma Terrebonne Civic Center.

Alison Paris, who holds 15 years of federal market experience, has been named vice president of talent acquisition at Peraton.