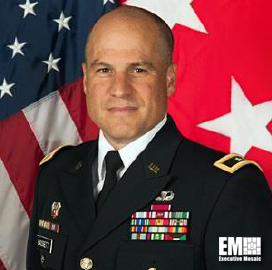 Maj. Gen. David Bassett, the program executive officer of command, control and communications-tactical at the U.S. Army, will be featured as an expert panelist during Potomac Officers Club’s 4th Annual Army Forum on Oct. 31st.

Click here to register for the 4th Annual Army Forum.

In his role, Bassett guides a workforce of more than 1,600 personnel who acquire, field and support the communications networks, radios, satellite systems and other hardware and software Soldiers require for information dominance on the battlefield.

In addition to the combat vehicle modernization efforts for each of the ACAT I programs, Bassett was also responsible for multiple Foreign Military Sales efforts and pending programs such as Mobile Protect Firepower. The ground combat systems portfolio has an annual budget of over $2.67 billion with a total program budget of over $14.8 billion (POM FY16-20).

He was commissioned through ROTC in 1988 into the Signal Corps with a Bachelor of Science in Electrical Engineering from the University of Virginia. As a junior officer, he served in Germany in tactical positions as Communications Platoon Leader, 2nd Armored Cavalry Regiment and Battalion S4 and Company Commander in 123rd Signal Battalion, 3rd Infantry Division.

Following the Signal Officer’s Advanced Course and Advanced Civil Schooling at the University of Virginia where he received a Master of Science in Computer Science, Bassett was assigned to the US European Command Staff, where he served as the Requirements Analysis and Interoperability Action Officer, J6.

He transferred to the Army Acquisition Corps in 1999 and was assigned to Fort Monmouth, New Jersey, as Operations Officer, Communications and Electronics Command Software Engineering Center.

Bassett went on to serve at Fort Monmouth as the Chief Software Engineer for the Future Combat Systems Network and as Program Integrator and Product Manager, Future Combat Systems, Software Integration. He then served on the Joint Staff as the Ground Maneuver Analyst, Capabilities and Acquisition Division, J8.

On October 31st, Potomac Officers Club will host the 4th Annual Army Forum at the 2941 Restaurant in Falls Church, Va. Dr. Bruce Jette of the U.S. Army will be the keynote speaker for the event. A full expert panel of GovCon leaders will also be featured during the forum including MG David Bassett and Stuart Hazlett.

Click here to register for the 4th Annual Army Forum on Oct. 31st.

Maj. Gen. David Bassett, the program executive officer of command, control and communications-tactical at the U.S. Army, will be featured as an expert panelist during Potomac Officers Club’s 4th Annual Army Forum on Oct. 2nd.

Click here to register for the 4th Annual Army Forum.