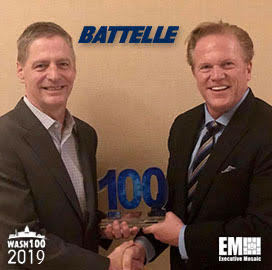 Executive Mosaic recognizes Von Thaer for leading efforts to advance biosecurity and other emerging technologies for Battelle. We are pleased to present the most coveted award in government contracting to Lou Von Thaer.

Von Thaer joined Battelle as the president and CEO in August. 2017. Previously, he served DynCorp International as CEO between July 2015 and July 2017. He was responsible for the $2 billion budget, managing 12,000 employees and supporting growth across several federal market sectors. He also served as the president of the National Security Sector of Leidos for two years and held various leadership positions with General Dynamics between 1998 and 2013.

In addition, Von Thaer serves as board chair of the Pacific Northwest National Laboratory. He is the co-chair for UT-Battelle and is a member of the Defense Science Board, the National Defense Industrial Association, the Nationwide Children’s Hospital and TAPS (Tragedy Assistance Program for Survivors). He is also a trustee of the Kansas State University Foundation and a member of the Ohio Business Roundtable and Columbus Partnership’s Executive Committee.