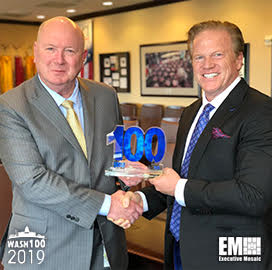 Jim Garrettson, founder and CEO of Executive Mosaic, presented Ken Asbury, chief executive officer and president of CACI International, with his sixth consecutive Wash100 Award on Wednesday. Asbury is the only active 2019 Wash100 recipient to have received the award for six consecutive years with the same company.

Executive Mosaic recognizes Asbury for pursuing organic growth through M&A activity and IT services for CACI. We are pleased to present the most coveted award in government contracting to Ken Asbury.

Asbury spent three decades with Lockheed Martin in various leadership roles including president of three successful operating units and vice president of capture excellence. He led one business unit to more than $6 billion in new contract wins and $3.7 billion in sales while also achieving a 75 percent new business win rate and double-digit sales for Lockheed Martin during his tenure.

He was honored as the 2006 National Executive of the Year by the National Management Association. Asbury also served in the U.S. Army Security Agency as an interpreter and translator. He graduated with a bachelor’s degree from the University of Oklahoma.