David Luber, executive director of the United States Cyber Command, will be featured as the keynote speaker during the Potomac Officers Club’s 2019 Cybersecurity Summit on May 8th.

At the event GovCon leaders from the public and private sector will discuss cyber resiliency and how to collaborate effectively on new cyber programs, initiatives and emerging technologies in the federal market.

During his career, Luber held a range of leadership and technical positions. He provided creative solutions to automate NSA business processes for a decade. In addition, he maximized collaboration throughout the NSA and the intelligence community, developed new tactics to enhance computer network operations supporting NSA and leveraged partnerships to produce integrate intelligence critical to warfare supporting national missions. 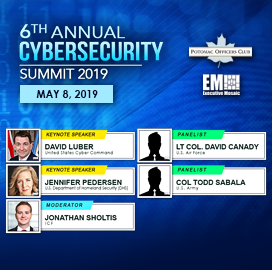 Luber graduated with a bachelor’s degree in Computer and information science from the University of Maryland, University College and a master’s degree in network security from Capitol College in 2004.

Don’t miss out on the 2019 Cybersecurity Summit on May 8th. You can register for the event here.